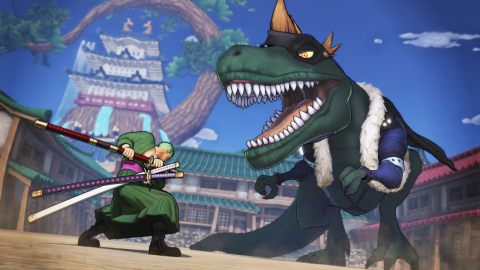 Nintendo Download: Get Hooked on Arrr-cade Action With the Blue Sea Pirates

A pandemic can’t stop the Nintendo Download! That’s an especially good thing too, if you’re locked in your home. Pretty sure that’s the entire globe.

While everyone in creation is isolating inside, there isn’t really a better time to hit up the eShop and download something new for your Switch. While there isn’t a ton of triple-A stuff to grab, there is the new One Piece title, with apparently has a dinosaur wearing an overcoat. Or it might be a shall.

If that doesn’t float your boat, there are also a few lesser releases to have a look at. There are some standouts sprinkled in there too, like Zombie Army Trilogy and the arcade version of Ikari III. No, they don’t make for the biggest week all around, but hey at least it’s something to do.

Jason's been knee deep in videogames since he was but a lad. Cutting his teeth on the pixely glory that was the Atari 2600, he's been hack'n'slashing and shoot'em'uping ever since. Mainly an FPS and action guy, Jason enjoys the occasional well crafted title from every genre.
@jason_tas
Previous Skatboarding game Session gets new mode and more
Next Horizon Zero Dawn comic coming up from Titan