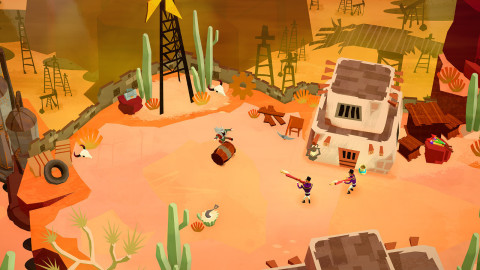 Home / News / Nintendo Download: Conduct a Symphony of Brutality in the Weird West

Lots of new games hitting the Switch this week include the first two Metro titles, as well as the “weird” western Bloodroots.

Another week, another odd choice for headline game in Nintendo’s “Download”. That title would be Bloodroots, a western with a weird edge to it, that allows gamers to improvise as to their weapons of choice.

Why’s it a… weird choice? Because Metro 2033 and Last Light Redux’ land as well. Maybe it’s just me, but I’d consider those bigger releases, even though they’re technically just ports.

Also this week is Sega Ages Sonic the Hedgehog 2, which includes Knuckles, and a whole bunch of other stuff. Scroll down and check it out.

Jason's been knee deep in videogames since he was but a lad. Cutting his teeth on the pixely glory that was the Atari 2600, he's been hack'n'slashing and shoot'em'uping ever since. Mainly an FPS and action guy, Jason enjoys the occasional well crafted title from every genre.
@jason_tas
Previous CORRUPTION 2029 (PC) Review
Next Arcade classic shooter Life Force arrives for Switch