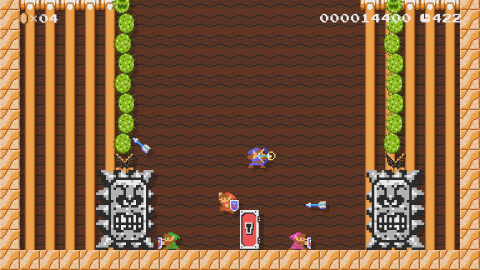 The Legend of Zelda’s Link joins the fun in Super Mario Maker 2 thanks to this week’s update, along with a host of new course parts.

The Legend of Mushrooms

Yes, he’s a long way from home, but Link is indeed the newest addition to Super Mario Maker 2. Once players find a Master Sword, they can turn into the elven hero.

He’s more than just a new aesthetic too, as Link has his arrows in tow. That means he can hit far off targets, which Nintendo says will open “up a whole new world of design possibilities for creators”. He’s also got the answer to Spiny’s with his patented ‘downward thrust’ move, and can wield bombs to blast open new pathways. Is it me, or does it sound like he breaks the game?

He’s also not the only new addition. Nintendo’s make-a-course sequel is expanding quite a bit with this week’s update, including getting a few new enemies.

Super Mario Maker 2, along with the latest update, is available now for the Nintendo Switch.

Jason's been knee deep in videogames since he was but a lad. Cutting his teeth on the pixely glory that was the Atari 2600, he's been hack'n'slashing and shoot'em'uping ever since. Mainly an FPS and action guy, Jason enjoys the occasional well crafted title from every genre.
@jason_tas
Previous The World of Cyberpunk 2077 gets deluxe edition
Next Megaquarium (Switch) Review