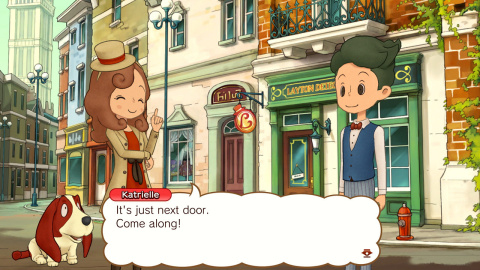 Nintendo Download: A Week Filled With Mystery, Mischief and Mickey

It’s a family-friendly week on the Nintendo Download, with the likes of a Layton game, Disney Tsum Tsum Festival, and New Super Lucky’s Tale.

Fun for all ages

Not every week can be a cavalcade of adult-skewed titles you know. Some week’s The Switch needs games that’ll play to its younger audience too. This is one such week, with three pretty big headliners that are safe for almost all ages. Well, maybe a little less so for Layton’s Mystery Journey.

This game sees the familiar Prof missing, with his daughter taking on the task of tracking him down. If you think you remember this game, it’s probably because you do, since it first came out on the 3DS. This one sports enhanced visuals though, of course.

As for Disney Tsum Tsum Festival, that’s a set of family-friendly party games. And since it stars the Disney-themed Tsum Tsum, it’s got the cute-factor in spades.

And New Super Lucky’s Tale? That’s a re-release too, as the formerly Xbox exclusive game comes to the Switch. As you might imagine, the ‘New’ tag means you’ll find a few enhancements from that earlier release. We reviewed that game here by the way, and thought it to be a fun, 90s-style platformer.

Jason's been knee deep in videogames since he was but a lad. Cutting his teeth on the pixely glory that was the Atari 2600, he's been hack'n'slashing and shoot'em'uping ever since. Mainly an FPS and action guy, Jason enjoys the occasional well crafted title from every genre.
@jason_tas
Previous Lots more Hasbro Star Wars figures announced for 2020
Next Marvel 2099 is back in a new Spider-Man epic