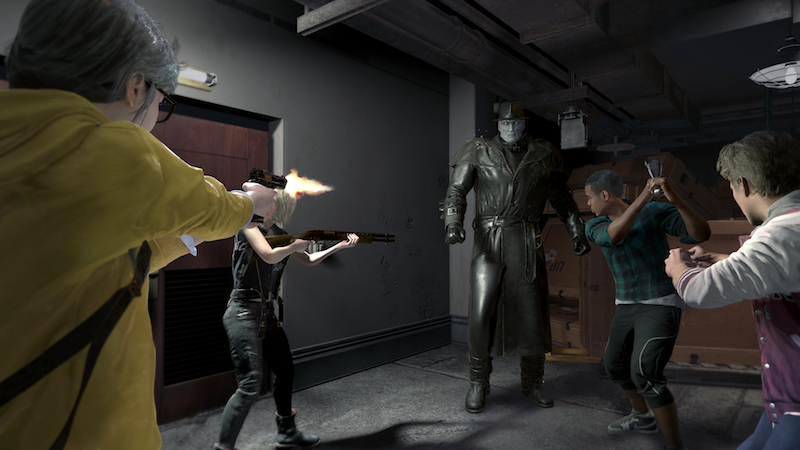 Here’s Capcom’s Project Resistance trailer if you missed it

The world of Resident Evil got a new game announcement last week. If you haven’t seen it, click on through for an early look at Project Resistance.

Lab in the woods

There’s a lot we don’t yet understand about Capcom’s newest game in the Resident Evil universe. Chiefly, why it’s codenamed “Project Resistance”, and also why there’s a monstrous Cabin in the Woods feel to it. That’s something that we’ve never seen before in a RE title.

So it’s definitely got some new ideas, for this franchise anyway. It’s also sporting an asymmetrical gameplay type, with one player acting as ‘dungeon master’ and everyone else playing as the heroes.

It also seems like the DM can slip into the shoes of enemies and battle it out up close and personal.

In each 4v1 match, one Mastermind player tracks the four Survivors through a network of security cameras, staying one step ahead at every turn to prevent their escape. The Mastermind plots a deadly course by wielding a strategic deck of cards to create dangerous obstacles for the Survivors, such as summoning vicious creatures, setting traps, manipulating the environment, and weaponizing security cameras. He or she can also directly control zombies in play. In addition, Mastermind players can even step into the trench coat of the towering, deadly Tyrant for the first time in franchise history. In turn, the Survivors must cooperatively work together as a team to fend off the Mastermind’s attacks and complete puzzle style mission objectives to escape the map before time runs out. Each Survivor possesses unique skills to help their team overcome the Mastermind’s challenges and survive the sinister experiment.

Capcom has also revealed that there will be a closed beta test for Resistance. Invites only for this one. It’s coming up incredibly fast too, with an October 4th through 7th timeframe.

The beta will be open to Xbox Insider Program and Resident Evil Ambassadors for the Xbox One and PS4 respectively. Registration is open right now and will run through this Wednesday, so get your request in fast if you want to be a part.

Jason's been knee deep in videogames since he was but a lad. Cutting his teeth on the pixely glory that was the Atari 2600, he's been hack'n'slashing and shoot'em'uping ever since. Mainly an FPS and action guy, Jason enjoys the occasional well crafted title from every genre.
@jason_tas
Previous Check out Marvel’s new Dawn of X trailer
Next NYCC 19: Diamond and Gentle Giant outline exclusives