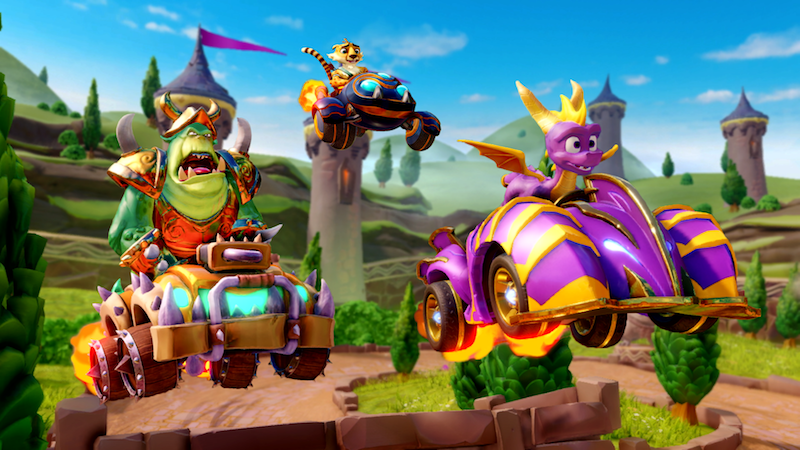 Activision’s other mascot character is on the way to Crash Team Racing. The Spyro Grand Prix arrives this Friday, August 30th.

This next few weeks is a pretty busty time for Spyro the Dragon. Not only does the little guy get to see his Reignited Trilogy head to the Switch and PC, but he’s also getting a little karting in.

That comes, of course, in the form of a DLC pack for Crash Team Racing. Crash Bandicoot’s kart racing title redux arrived earlier this year for consoles, and has been getting a steady stream of downloadable content in the form of “Grand Prix” packs.

The packs are free of charge as long as you own a copy of the game, and have so far included a good deal of content. This one will be no different, with Spyro and a few of his buddies getting in on the racing fun.

In the Spyro & Friends Grand Prix, players can burn rubber and cruise through “Spyro Circuit,” the all-new Spyro-themed track while collecting gems, dodging firework bundles and (of course) flying by sheep. Spyro won’t be venturing into this alone, the purple speedster will be joined by Hunter and Gnasty Gnorc as playable characters with Sparxjoining in the fun as a protection mask akin to Aku Aku on the Spyro Circuit track. The Spyro & Friends Grand Prix will also come packed with other hot content that players can earn when connected to the internet, such as fresh new rides with the Spyromobile, Gnasty Ride and Dragonfly, as well as other new Pit Stop items including the amazing new Gem Paint Jobs and element-themed wheels, the Viking Polar Skin, the Orc Big Norm skin and more!

The above will be landing this Friday (August 30th, 2019) too, so you won’t have to wait long to rev those engines.

Jason's been knee deep in videogames since he was but a lad. Cutting his teeth on the pixely glory that was the Atari 2600, he's been hack'n'slashing and shoot'em'uping ever since. Mainly an FPS and action guy, Jason enjoys the occasional well crafted title from every genre.
@jason_tas
Previous The Marvel Comics #1000 launch trailer has arrived
Next Classic Aladdin and Lion King games returning to consoles