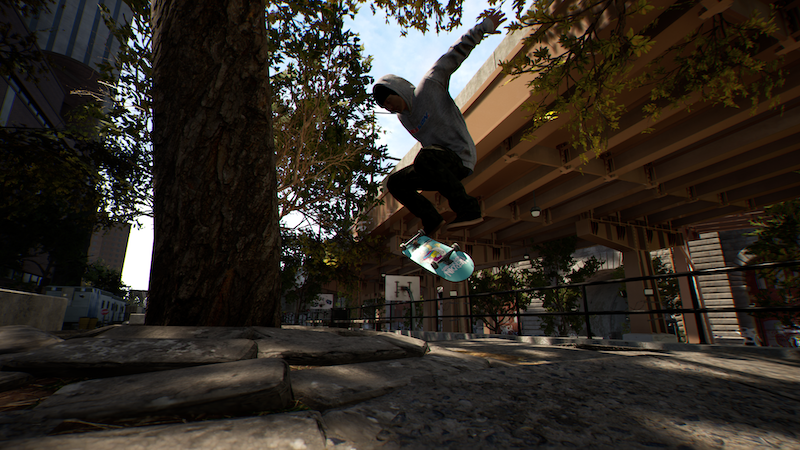 Video game skateboarding returns on consoles and PC with Session from creā-ture Studios. The game hits this fall, and has a brand new trailer

It’s been a while since we’ve seen a good skateboarding video game. If you count Tony Hawk’s Pro Skater 5 in that mix, it’s been four years. If you don’t, and you probably don’t, then it’s been since the universally liked Skate 3 debuted in 2010. So, it’s probably about time.

From the looks of it at this point, creā-ture Studios’ Session might be that game. A realistic skate sim, Session is a radical departure from THPS and Skate both.

Inspired by the golden era of skateboarding (the early ’90s through the early 2000s), Session lets players experience what skateboarding is really like — an incredible culture where there are no goals other than expressing your creativity and achieving success through hard work, perseverance and a bit of madness. This is the most authentic and grounded skateboarding game yet: Session is a conscious move away from arcade-style skateboarding games. This is no place for button-mashers!

Not too shabby, eh? If you’re a skate fan, I can’t imagine that Session isn’t instantly intriguing. While the full game won’t arrive till some time in 2020, there will be an early access version landing on Steam. And it’s coming sooner than later.

That unfinished version will arrive on September 17th for the PC, which is just a little over a month. Once it hits Steam, it’ll also arrive for the Xbox One’s early availability program just a few days later.

Keep reading for the skinny on what you can expect from it.

The PC early access version of Session will include true stance-stick controls: each “stick” controls one foot to replicate real skating while highlighting the difficulty of“switch” tricks. The skateable environment is a 1:1 scale of New York focused on lower Manhattan, featuring the legendary Brooklyn Banks and surrounding Financial District. Players will hit many of the iconic spots that helped shape what street skating is today. The game will also feature an extended video editor that allows players to create trick montages in-game and share them. Creating skate videos has always been an essential part of skate culture, and creā-ture has made sure the production matches the period-specific, VHS-style visual aesthetic.

Jason's been knee deep in videogames since he was but a lad. Cutting his teeth on the pixely glory that was the Atari 2600, he's been hack'n'slashing and shoot'em'uping ever since. Mainly an FPS and action guy, Jason enjoys the occasional well crafted title from every genre.
@jason_tas
Previous Activision releases fresh multiplayer footage of Modern Warfare
Next Friday’s Limited Run Games offerings include Turok, Bard’s Tale