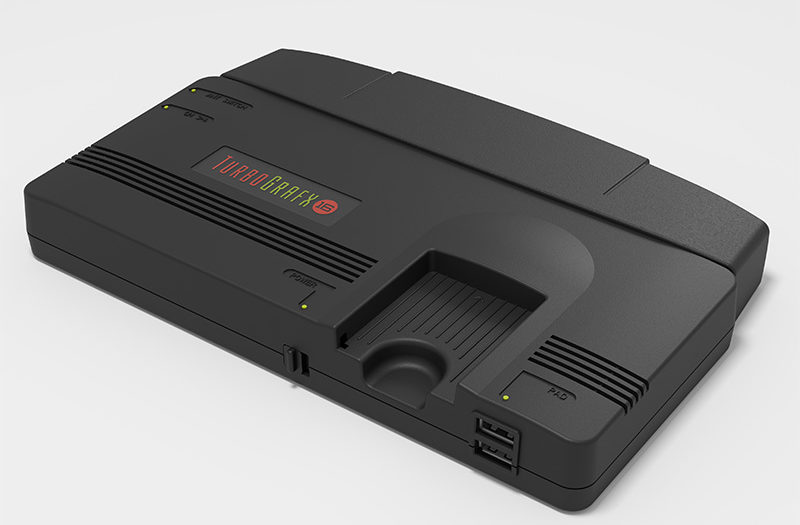 The Turbografx 16 Mini has been fully revealed by Konami today, and it’s pretty loaded. It’s also a pretty long way’s off, arriving in spring 2020.

If you were fortunate enough to own a Turbografx-16 (or PC Engine in Japan) back in the late 80s/early 90s, then you know how cool it was. The console, which was originally from NEC (now Konami), sort of straddled the line between 8 and 16bit in terms of quality.

The games looked awesome, and there was even a mascot of sorts with Bonk, though there were few licensed titles. That might’ve been one of the reasons that the console didn’t really catch on. Still, the library wasn’t exactly thin, and when Turbo games were good, they were flat-out great.

Now Konami is bringing the classic console back, as a retro mini. Announced a while back, we finally have a full games list, and it’s terrific. A total of 50 games will be included, with 24 from the Turbo, and 26 from the PC Engine. These games will come together in one collection, chosen from the two different markets.

You can check out the full lineup below, but there are some real winners. Blazing Lasers, Alien Crush, Bonk’s Revenge, Dracula X, and Snatcher are all included. Temper your enthusiasm though, because there are some caveats. Mainly, that PC Engine titles will be playable only in their native Japanese.

So even though Snatcher was ported to the US (for the Turbo CD), this one will be strictly in Japanese, making it all but unplayable to anyone who doesn’t speak the language. And I feel like I have to mention too how weird it is that the original Bonk, Keith Courage, and Splatterhouse are not included. I don’t get those choices.

The Turbografx-16 Mini will debut next March, with pre-orders going up as soon as Amazon’s Prime Day, this coming Monday July 15th. In addition to the console, a multitap and extra controllers will be offered.

Jason's been knee deep in videogames since he was but a lad. Cutting his teeth on the pixely glory that was the Atari 2600, he's been hack'n'slashing and shoot'em'uping ever since. Mainly an FPS and action guy, Jason enjoys the occasional well crafted title from every genre.
@jason_tas
Previous Captain America shield returns to retail in Marvel 80th line
Next Unicron has come to Hasbro’s HasLab funding platform