When the games were announced earlier this year, it seemed obvious that the fan base was going to be split over the newest Pokémon titles for a long, long time.

Fast forward several months through the next games’ release, and what we received on launch is a potential new sub-series of Pokémon . Although it is not considered a spin-off, Pokémon Let’s Go differs from the mainline, “core” Pokémon games in many big ways.

Pokémon Let’s Go Pikachu and Let’s Go Eevee look like standard Pokémon games from the onset. Players begin with a single monster and fight, collect and explore through a region in the ultimate quest to become the best there ever was. This is essentially a remake of Pokemon Yellow. There are a few new story beats, but really, those who played Yellow as kids are really in for a nostalgia trip here.

As a longtime fan of the series and specific game upon which these are based, I like that we get a modern Kanto remake. It is even cooler when you acknowledge that Let’s Go is a remake of Yellow, and not Red, Blue or Green. As a remake, I love that the game is a near note-for-note remake. I also appreciate where the series might go in the future. I am not disappointed by the re-used Pokémon and region. In fact, I like it quite a lot. 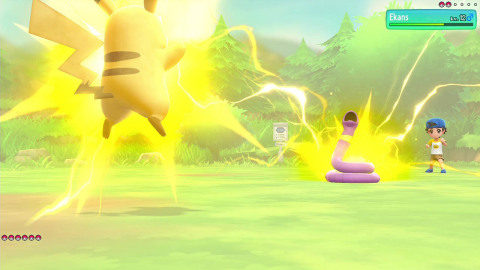 Let’s Go does change a few things that have been linked to Pokemon for generations. For one, wild battles have no place in Let’s Go. Instead, encounters are not random and are completed with motion controlled throwing motions, similar to Pokémon Go. This method of catching Pokémon grew on me immensely, and  at this point, I do not want to go back to wild Pokémon battles.

In addition, long-standing mechanics, like abilities and held items, were removed for Let’s Go. This is something else I really enjoy. I understand the appeal of these variables for competitive games, but as a campaign-only experience, I love the changes.

The gameplay loop in Let’s Go is largely the same it has always been. Instead of forced fights with wild Pokémon though, catching Pokémon gives your party experience. The result is a game that is less tedious overall.

I would be remiss if I didn’t mention the presentation.

Apart from a few frame rate slowdowns, the game looks and sounds incredible. It is breathtaking to see Kanto, and all of these monsters, in high definition. The music sounds as good as ever as well. On the downside, Game Freak really needs to do something about the way in which every NPC looks like the same person with a different hair style.

Pokémon Let’s Go Eevee is exactly what I have been waiting for in a Pokémon game. A revisit to my first region, high definition visuals and a game focused entirely on the campaign is exactly what I wanted. When the next core games release, you know I will be in line, but at this point, I cannot wait for Let’s Go Gold and Let’s Go Silver.

Erich was introduced to gaming by his grandfather before he could walk. Since then, he has grown up loving Nintendo and most games in general. He couples his love of videogames with journalism to cover news, provide reviews and tell it how it is in the gaming world.
Previous Mechwarrior 5: Mercenaries dated, hits in a little less than a year
Next Thunderous launch trailer and fresh screens arrive for Just Cause 4