Indie publisher Vault Comics has a pretty cool cover planned for the second printing of Fearscape #1. It pays homage to a Vertigo classic.

Vaulting back into fear

It’s very possible that you’re not too familiar with Vault, since it’s a smaller publisher. That’s something that you might want to rectify however, since the company’s Fearscape book is proving quite popular. 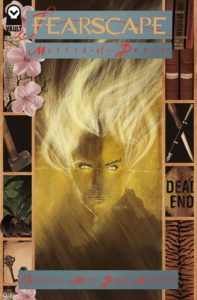 The first issue of  the horror series has sold through its initial shipment, and is heading back to print for another round.

The Fearscape is a world beyond our own, populated by manifestations of our worst fears. Once per generation, The Muse travels to Earth, discovers our greatest Storyteller, and takes them with her to the Fearscape to battles these fear-creatures on our behalf. All has been well for eons, until The Muse encounters Henry Henry, a plagiarist with delusions of literary grandeur. Mistaking him for our greatest Storyteller, she ushers him into the Fearscape. Doom follows.

For that second run, the comic won’t just be getting a run of the mill variant, it’ll be paying tribute to a true classic of the art form. DC’s Vertigo line has just returned, and with it brought a whole universe of Sandman-branded books. What’s that have to do with Fearscape?

Well, as I mentioned before, the cover you see here is an homage to the comic that started it all for Vertigo – Neil Gaiman and Dave McKean’s The Sandman. The image that graces the front of Fearscape #1 is from artist Tim Daniel, and plays off of The Sandman #1’s cover nicely. It’s enough to give you a serious case of nostalgia, should you remember that classic from it’s original publication.

Watch for Fearscape #1, back on stands some time soon.

Jason's been knee deep in videogames since he was but a lad. Cutting his teeth on the pixely glory that was the Atari 2600, he's been hack'n'slashing and shoot'em'uping ever since. Mainly an FPS and action guy, Jason enjoys the occasional well crafted title from every genre.
@jason_tas
Previous Marvel celebrates Ben Grimm’s wedding with FF “villain” variants
Next Mezco’s take on Marvel Comics’ Cable goes live for pre-order