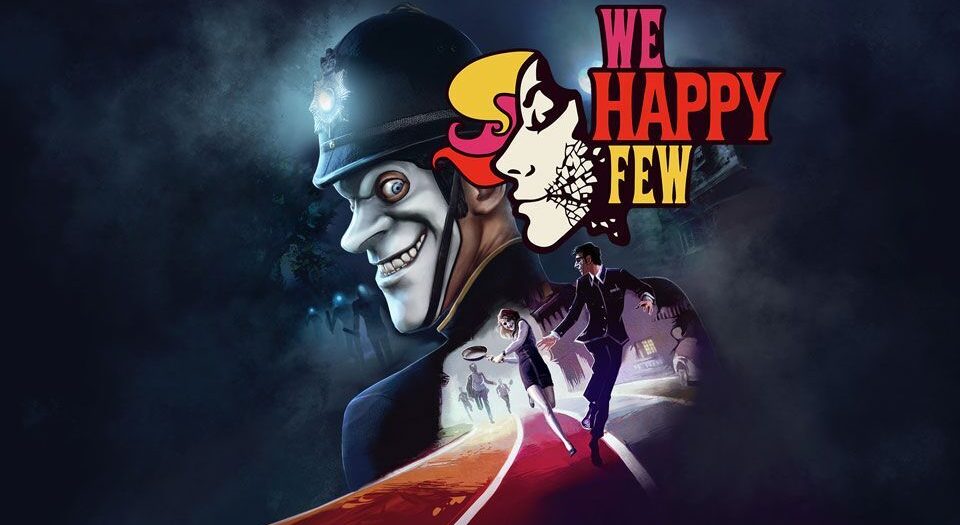 Happy is the Country with no past, according to the citizenry of We Happy Few. For a nation’s sins make forgetting history the only acceptable way to move forward.

After a hopeless disparity engulfed a collapsing British Empire, individuals with callous dispositions concluded that repressing the populace was the only way for life to continue on for the Isle.

As a result of their collective villainy,  an engrossing story full of depth, mystery, and utterly heart-breaking moments await in the fantastical world of Wellington Wells. Hence if you’re ready to become absorbed in a drug-fuelled Orwellian dystopia, few games nail the aesthetic like We Happy Few. 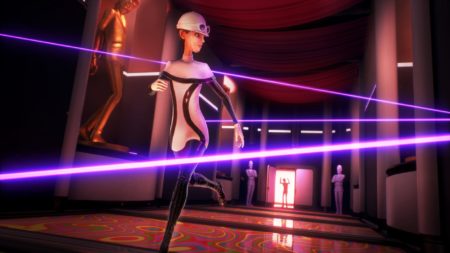 We Happy Few tells the tale of a scrounging British society, consequently parsed towards a police state after surrendering in World War II. Told from the viewpoint of three unique protagonists, the narrative forms a rather cohesive picture of life in this crumbling society. First and foremost is Arthur Hastings, a former journalist on a guilt-riddled quest for redemption.

You’ll then play as Sally Boyle, a sly chemist with ruthless ambition tempered by self-doubt. And last but not least there’s the bombastic Oliver “Ollie” Starking, a former sergeant haunted by his dead daughter’s ghost. From the famous to the homeless, each of these three embodies a caste in the brutal brotherhood of Wellington Wells.

Immediately at the onset, you’re introduced to the conformist societal expectations the characters have to endure. Redacting depressing past articles, listening to Uncle Jack, and conforming to propriety form the basis of daily life for the first protagonist Arthur Hastings.

What’s immediately noticeable is how blissfully repressed Arthur’s acquaintances are in the world. Contrary to Arthur’s awakened mind, joy is the only acceptable emotion for the existence of well-to-do Wellies. For reacting with anything other than a permanent smile turns fellow citizens to outcasts. They’re then beaten, chastised, and forced out of town as Downers, no longer taking the reality-distorting drug Joy.

Thus begins an emotional narrative full of psychedelic scenarios, crazed interlopers, and introspective philosophy about the nature of happiness. After a series of close calls, each of the protagonists learns how close Wellington Wells is to facing a major catastrophe. But Arthur, Sally, and Ollie aren’t heroes in this tale. They’re mere survivors, trying to escape the hellishly debaucherous state to find greener pastures. To that end, you’ll explore, sneak, and fight your way out of trouble. 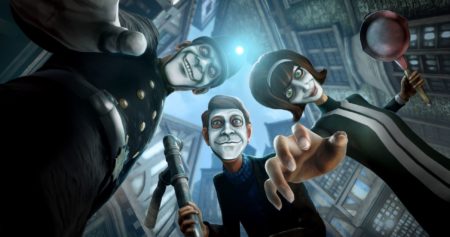 Life in Wellington Wells facades beauty – belied by drug-induced ignorance, crumbling city infrastructure, and a power-mad leadership caste.  Citizens are required by law to take a hallucinogenic drug called Joy, a memory-altering pharmaceutical that paints a rosy picture of their repressed lives.

Consequently, after years of an “everything is fine” mantra, the flaws that threaten to engulf the state have reached a breaking point. All three protagonists come to that conclusion separately – and all three see escape as their only viable option.

The majority of the game focuses on exploring the world and its surroundings. Crafting, sneaking, and outsmarting enemy groups are therefore your standard options for completing quests. Each character has a unique set of skills available to them, with unique mechanics others lack. While Arthur seems to be a jack-of-all-trades, Sally and Ollie embody specialized chemist and mechanic roles respectively. Their strengths and weaknesses result in refreshingly different playstyles throughout each character’s act. Therefore, each completed mission feels like an accomplishment, and you’re subsequently rewarded in stride.

As a result, you’ll be given upgrade points to spend on three skill trees. While a few unique skills differentiate a character, the majority are universally available across the playable protagonists. But cracks appear in the skill system when realizing how broken certain skills cause the end game to feel.

By taking particular perks, a character can suffer no survival or non-conformist penalties to make their resulting experience a breeze. Those elements ground We Happy Few within its reality. Once players are able to run, steal, and stay out without fear during the night, any sense of challenge flees the game. 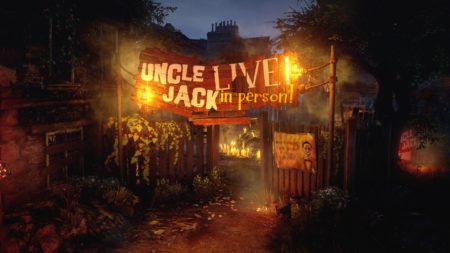 Furthermore, a lack of variety to combat makes the flaws in the skill system inherently worse. Apart from some admittedly inspired explosive devices, We Happy Few’s combat focuses solely on melee fights. While the combat system is somewhat serviceable, little difference exists between beginning and end-game encounters. Each melee weapon, though visually different, ends up feeling the same as its counterpart.

Where We Happy Few shines is within the diversity of options usually available besides duking it out in fisticuffs. Quests have multiple paths to completion in many cases. Entertaining but difficult scenarios exist to complete an objective.

Crafting a knockout serum to poison cultist chalices, convincing characters to bypass locked doors, or just sneaking past with distraction devices make up for the lackluster melee. The sheer amount of paths available makes quests feel full of possibility as you run through the game. We Happy Few shines here – as a fantastic example of divergent developing gameplay. 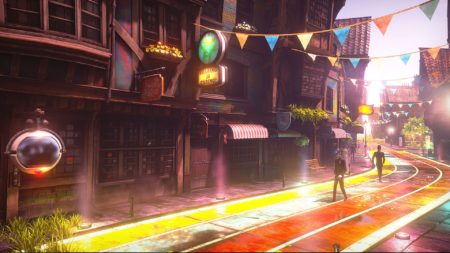 We Happy Few’s troubled development cycle carried severe baggage hard to overlook. Be aware that technical issues and bugs exist in the final release. Character placement, animation stuttering, and getting stuck in the environment are commonplace throughout the game. But the positive elements of the game overcome the issues present to showcase a unique, psychedelic look at the consequences of repressed misery.

After the initially disappointing early access launch, severe lack of communication from the development team, and a constantly delayed release date, the final release of We Happy Few is nothing short of a refreshing turnaround. For fans of explorative, deep narratives found in Fallout, Bioshock, and the more recent Prey, We Happy Few provides a deeply satisfying experience for those willing to dive in.

We Happy Few leaves you reeling and eager for more adventure throughout Wellington Wells. An amazingly gorgeous dystopia is complimented by stellar narrative storytelling and a landscape just begging to be explored. But a lack of combat options and some unfortunate technical issues hamper the experience.

Mike Allio is a writer from the Greater San Francisco Bay Area in California. He's a passionate creative, and when he's not writing he loves playing video games. Some of his favorite series have darker tones to them - Dark Souls, Bloodborne, and Mass Effect are just a few of his favorites. Check him out on Twitch.tv/adaywalker, and follow his Twitter handle @TheMikeatNite to learn what he's up to.
@TheMikeatNite
Previous Toys R Us is gone, and took a part of the industry with it
Next Icon Heroes launches line of Karate Kid bobbleheads