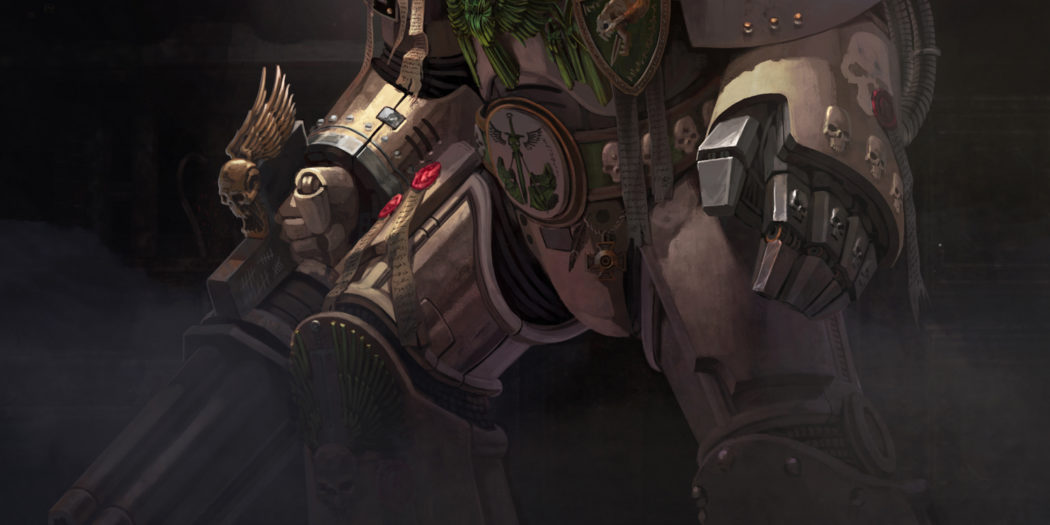 Space Hulk: Deathwing returns to the PS4 and PC with an Enhanced Edition that seeks to iron out some of the troubles plaguing the original release.

A brief refresher on the troubled road traveled by Space Hulk: Deathwing

The original version of Deathwing released back in December 2016 to rather lukewarm reviews. Though the models, environments, and moment-to-moment gameplay Streum On Studios presented were great, a litany of technical glitches, inconsistent framerate issues, and lack of player progression dragged the overall product down. Despite these issues, the title retained a cult appeal to die-hard Warhammer 40k fans. An active community of gamers kept the title alive long enough for Streum On Studios to announce a new version of the title in late March 2018.

For Whom The Bell Tolls

Nary a hitch in framerate impacted my own personal time playing through both the campaign and multiplayer on PC. A few reports of hitches appear to hamper the console version when busy but aren’t game-breaking. I experienced a single hard crash during my playthrough – though a myriad number of background processes may be to blame. The main takeaway should be that Space Hulk: Deathwing Enhanced Edition remains as graphically beautiful as ever. The overall experience thus improves with the dreaded frame-drops removed. These technical improvements therefore fully realize the framework envisioned by the original release. 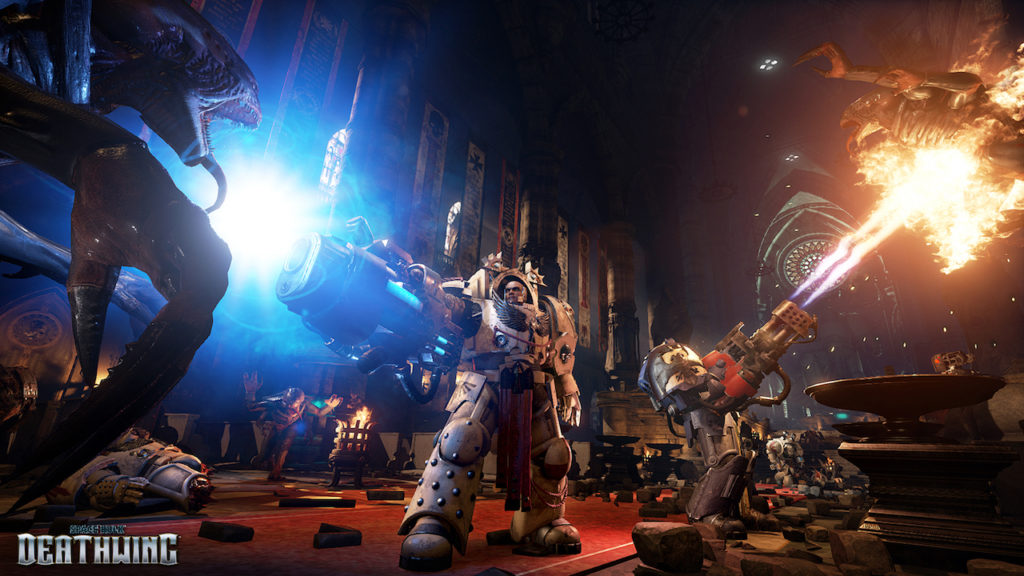 Spoiler alert: the 40k assortment of weaponry looks bada**. Your starting arsenal of Stormbolters deliver .75 caliber bullets into the Genestealer horde and have some satisfying punch to them. Progressing through the single-player campaign introduces a slew of futuristic weaponry, from acidic Gatling guns to a sniper-esque shotgun. A complete multiplayer progression system overhaul allows players to dive into their favorite class and run with their preferred weapons. Whether players prefer the forceful impact of the Mace of Absolution or the unending spray of the Assault Cannon, each of Deathwing’s five classes caters to a preferred personal style. Personally, I loved the look of the newly-added Interrogator-Chaplain class. The skull helm blinded me to all the other benefits provided by the other four classes needed by a full Deathwing multiplayer squad.

With these changes, Deathwing feels the way the developers must have originally intended it to feel – adrenaline-fueled, tense, and overwhelming. Mowing down hordes of Tyranids waiting throughout the many nooks and crannies of the Space Hulk Oletheros puts players in the shoes of their Space Marine. For fans of Warhammer 40k, no other game comes close to aping the experience. The quality of life, technical, and progression changes make this game the diamond in the rough the original should have been. 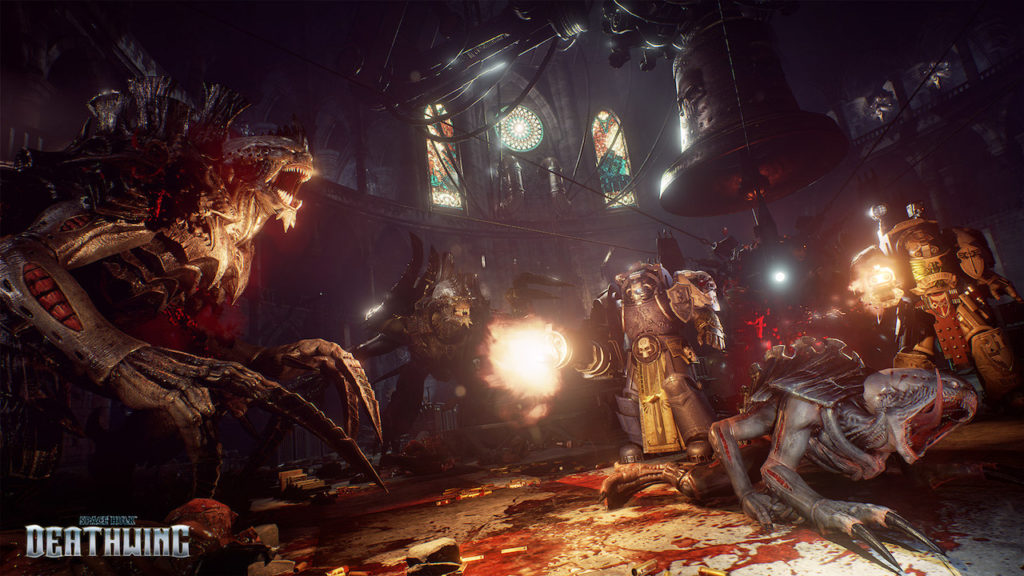 Despite these changes, however, some flaws baked into Space Hulk: Deathwing prevents it from being truly great. The enemies of Space Hulk: Deathwing suffers from a lack of personality. The Tyranid Genestealers don’t present a collected drive that defines their actions. In fact, the entire narrative tying the missions together spouts too much exposition and left me feeling lost and confused. Despite attempts to provide characterization, your Brothers Barachel and Nachem come across as shallow husks meant only as meat shields for the player character. Streum On Studios has shown a penchant for deep narrative storytelling with their cult-favorite E.Y.E.: Divine Cybermancy. The shallow, flat narrative, therefore, feels incredibly disappointing and underwhelming on the whole.

Along with the flat narrative, a number of head-scratching design decisions also hamper Space Hulk: Deathwing’s design. An egregiously bright muzzle flash and nauseating head-bobbing are enabled by default – but luckily can be tweaked in-menu to what reasonable human beings find acceptable. Melee weapons such as the Force Sword/Axe and Lightning Claws lack the oomph and impact needed for a satisfying experience. These issues also tie into Deathwing’s cluttered HUD. Information about powers, weapons, and perks can be hard to find, based on the positioning of the where these elements end up. Most glaringly of all, no in-game voice chat exists for players to communicate with each other. These issues dragged my overall experience down, even once I understood how to overcome them.

Space Hulk: Deathwing Enhanced Edition truly defines the phrase, “diamond in the rough.” Streum On Studios deserves commendation for successfully changing the original Deathwing for the better with new progression and mission design. The technical and QOL fixes show their dedication to a loyal fan base and commitment to keeping Space Hulk alive. I absolutely believe this game deserves love. There’s fun to be had traversing the claustrophobic compartments of the Oletheros, drinking in the 40k universe’s rich atmosphere. I’d be excited to see how the team could improve their execution of this solid foundation with a sequel. For now, though, Space Hulk: Deathwing should remain on your radar as a solid co-op horde survival game.

Mike Allio is a writer from the Greater San Francisco Bay Area in California. He's a passionate creative, and when he's not writing he loves playing video games. Some of his favorite series have darker tones to them - Dark Souls, Bloodborne, and Mass Effect are just a few of his favorites. Check him out on Twitch.tv/adaywalker, and follow his Twitter handle @TheMikeatNite to learn what he's up to.
@TheMikeatNite
Previous Nintendo Download: A Deliciously Strategic Action-RPG-Puzzle Game!
Next Asgardians of the Galaxy coming this September, team details released