A classic returns, as Frank returns to his roots in Punisher #1. Well, sort of, though he is out of the War Machine armor, and back on the hunt for criminals. He’ll be doing it with one awesome variant cover too, remastered from the Mike Zeck original.

Fresh Start is rolling, with new #1’s hitting stores from now till pretty much the end of the summer. Who knows, we might even get some beyond that, as Marvel revamps its lineup. Part of that redux is one Frank Castle – The Punisher. 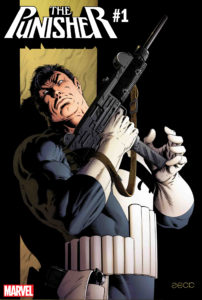 While Frank has been rampaging across the Marvel U in the War Machine armor as a one man army, all that’s about to come to an end. With or without the armor though, Punisher still has a taste for taking down the worst of the worst.

And set for this relaunch will be a classic cover, done up with some modern touches. Artist Mike Zeck lends his pencils to this one, and he’s a name that you should know. Zeck worked on a bunch of books for both Marvel and DC from the late 70s through the late 90s. And man, did he work on some big books.

For Marvel, Zeck did the art chores on Secret Wars, Spider-Man, and of course Punisher. I remember in particular, having a Mike Zeck Punisher poster hanging in my room when I was a kid. Cool stuff.

For this cover, Zeck’s Punisher has been remastered with colors from Richard Isanove, a current Marvel talent. The piece is a variant, and will see release right alongside the standard Punisher cover for the first issue. It’s unclear if that issue will be using Legacy numbering by the way, like many of Marvel’s other books under Fresh Start. So that’s something that remains to be seen.

As for Punisher #1’s release date though, that we do know. It hits the stands on August 8th.

Jason's been knee deep in videogames since he was but a lad. Cutting his teeth on the pixely glory that was the Atari 2600, he's been hack'n'slashing and shoot'em'uping ever since. Mainly an FPS and action guy, Jason enjoys the occasional well crafted title from every genre.
@jason_tas
Previous Divinity: Original Sin 2 Definitive Edition coming to Xbox Game Preview this month
Next No delays – DC’s Doomsday Clock #5 will hit stores this month after all