It’s been two weeks, and a fair bit has happened in the world of “The Walking Dead.”

Things are ramping up as the season begins to come to a close. Like most usual, the episode focuses on a few main groups of survivors. Lets get to it: 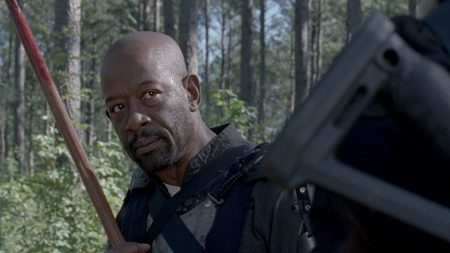 The beginning of the show is tying up a few loose ends from previous weeks.

Tara (Alana Masterson) was shot with a supposedly gunked up arrow during the Savior’s assault on the Hilltop, but she doesn’t get sick. Darryl (Norman Reedus) doesn’t buy this and argues that Dwight (Austin Amelio) should have done more to warn them of the attack if he were really on their side.

Inside, Michonne (Danai Gurira) and Rick (Andrew Lincoln) are talking. Michonne implores Rick to read Carl’s last note to him. This causes Rick obvious distress, and takes the note. He knows that Carl wants peace to prevail, but Rick is still going through some stuff after losing Carl.

The last we saw of Negan (Jeffrey Dean Morgan), he was being held captive by Jadis (Polyanna McIntosh).

When we see Negan now, he is strapped to a ground-gurney. Jadis is nearby. Negan tells Jadis that he is not responsible for the carnage his men unleashed on the trashland. Jadis walks away, and Negan uses his feet to propel himself towardsa trashbag on the ground.

Jadis returns with another a weird walker strapped to a gurney. By the timeshe returns, Negan has found a gun, a flare and a bunch of pictures that are very important to Jadis. He threatens to brun the pictures up, while Jadis threatens to burn Lucille up.

The two have a relative heart to heart, it seems. Negan explains that he named his bat Lucille because it was the name of his late wife.

A brief kerfuffle over the flare makes Jadis miss her taxi (helicopter??? What the hell is going on?). Jadis does not burn Lucille.

Morgan (Lennie James) begins the episode talking with Carol (Melissa McBride). The two are discussing going after Henry (Macsen Lintz), who disapeared in the chaos of the siege when the Hilltop prisoners escaped.

The two leave Hilltop, and Morgan is obviously deeply disturbed. He continues to believe he sees Henry. and is obviously on the edge of a mental breakdown. Morgan loses Carol.

Carol, at the end of the episode, finds Henry besieged by a bumch of walkers. She saves him, and he is extremely sorry for the way he has acted in trying to get revenge for his brother.

Morgan bumps into Rick, and is so close to losing it that he nearly attacks Rick. Rick talks him down, but the two are knocked out before they can make any further progress.

The two wake up in the control of the Saviors Rick was looking for. There is a long discussion. These are the Hilltop prisoners.

The group decides to keep Rick until they can deliver him to Negan. Rick explains that if they release him and Morgan, the entire group will be granted amnesty.

The Savior most vigorously advocating for this plan frees Rick when a herd of walkers come in. Mrgan and Rick turn the tables and slaughter every single one of the saviors, including the Savior who killed Henry’s brother. Rick confronts the man who saved him and owns up to lying.

Returning to the Hilltop, Morgan tells Henry that he killed Benjamin’s murderer. Negan escapes from Jadis and returns to the sanctuary. He returns in the dead of night, so we can believe that the morning will be a rough wake up call for Simon (Steven Ogg).

There was a lot of development in this episode. We learned that Rick is still flipping nuts, and we saw Negan get free. Otherwise, not too much plotwise happened. Regardless, things are at a flashpoint for the final two episodes of the season.

They should be a great two episodes.

Erich was introduced to gaming by his grandfather before he could walk. Since then, he has grown up loving Nintendo and most games in general. He couples his love of videogames with journalism to cover news, provide reviews and tell it how it is in the gaming world.
Previous April’s PS+ freebies include Mad Max, Trackmania, and more
Next Street Fighter live action series on the way from Assassin’s Fist creators