Not attached to the DC Universe proper is DC Black Label. The publisher’s new imprint is set to hit the ground running with stories from big names, starring major industry talent. 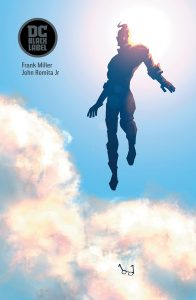 “DC Black Label offers leading writers and artists of any industry the opportunity to tell their definitive DC stories without being confined to canon,” explains executive editor Mark Doyle. “We are carefully crafting each series to fit the vision of the creative team. All of these creators are masters of their craft. I’m psyched to be working on a Wonder Woman story with Kelly Sue and Phil, helping to bring John’s vision of THE OTHER HISTORY OF THE DC UNIVERSE to life and reuniting with some of the greatest Batman talents in the industry.”

More or less, Black Label feels  a little bit like a more high-level version of the company’s old Elseworlds brand. That was a label that ran for a good long time and presented stories that were not connected to the DCU in any way. Sure they starred characters like Batman, but they were radically different that anything that you’d see normally. Like, say, a pirate Batman (yes really).

This doesn’t feel quite as radical as Elseworlds, but it nonetheless should feature some pretty interesting (and hopefully unique) stuff. Part of that is the selection of writers and artists that DC has tapped to be on board. Not all of the creative teams here are made up of industry greats, but most are. And the books that will be leading the way for DC Black Label sound like an extremely solid initial volley.

Jason's been knee deep in videogames since he was but a lad. Cutting his teeth on the pixely glory that was the Atari 2600, he's been hack'n'slashing and shoot'em'uping ever since. Mainly an FPS and action guy, Jason enjoys the occasional well crafted title from every genre.
@jason_tas
Previous Doctor Malcolm makes a Jurassic return for Jurassic World: Evolution
Next Last Wolfenstein II expansion hits with The Deeds of Captain Wilkins