MADiSON is a highly realistic, insanely terrifying psychological horror game demo that made me shit my pants. MADiSON builds up ambient fear to maximize all the jump-scares it has in store. While I do wish games would rely less on jump-scares and more on ambiance, I do feel that MADiSON had a terrifying environment right from the beginning. If you’re a fan of playing psychological horror games or watching friends play horror games this is right up your ally.

From what I could infer from the demo, MADiSON starts off with a young man inside his parents’ abandoned home. Luca, a disturbed youth, has come back to his parents’ home as an adult. Luca was obsessed with his relative’s Polaroid camera and as a child showed signs of violence and hearing voices. He was expelled from his school and his parents were told he needed help. Luca searches for the camera in the house. However, the camera seems to have been owned and is possessed by a serial killer named Madison and the house may be the scene of more depraved happenings and torture than the player thinks.

I like how Luca seemed to have been crazed as a child and possibly tortured or suicidal. It adds a lot more depth to his character than the average random protagonist who is usually some dumb journalist that stumbles upon an old house. Luca is directly involved in the mystery surrounding the house. This allows the player to be more curious and willing to investigate the spooky as shit house.

The game is a first person puzzler as far as the demo is concerned. You navigate with WASD and look and interact using the mouse. The player can pick up and interact with items in the house. The player then solves puzzles and triggers events that lead to the next area or “flag” being set (a condition in-game  that leads to the next area being unlocked once all “flags” have been raised). An example is finding a picture, finding a nail and hanging said picture on the wall where an obvious dust-absent mark was.

You can pick up film using the mouse and take photos using the camera by pressing F and left-clicking. I really thought it was clever how the player uses the Polaroid camera and must “shake” the photos with their mouse for the film to develop.

A curious thing is how a bunch of horror games have used cameras as a gameplay element. So while I do think it is done well in MADiSON, it is not really unique. That aside, the puzzles are fairly straightforward in the demo but rely on the player noticing things out of place and triggering events. I didn’t really need to think hard, I just needed to be observant to solve them. I went after a red herring when I thought that was the next step of the puzzle so I actually played myself for thinking too hard.

The user interface is very simplistic opting for a nigh non-existent HUD for favor of immersion. You only have a transparent cursor appear on interactive items some of which you can look at or pick up or move using the mouse. The inventory also has very minimal text and icons.

An issue I found with the demo which may not be a problem for the final release is a lack of instruction. I had to think of how to navigate the inventory menu. It is brought up when pressing tab or when I clicking on an interactive area but I did not know how to move between items.

The player can also inspect objects and rotate them around with their mouse which is quite smooth. Shaking photos can be clunky but the devs were smart to include a “center” option to center the photo for the player to look at properly which I appreciate.

The environment, lighting and models are really impressive. They are highly realistic. There were boxes for Polaroid film that were probably the most realistic boxes I’ve ever seen in a video game (demo). No jokes. They had freaking corrugated cardboard shadows bouncing as I rotated the box in the light which is crazy.

A minor gripe, which is an all too common lighting error in video games, is one light flickering in the hallway could be seen a bit through the wall of a room. What a nitpick.

The sounds for the demo are extremely anxiety inducing. The house makes all sorts of creaks and squeaks and the various small sounds such as picking up paper or a key are well done. There’s a chair that moves and scrapes on the floor. When I heard it I wanted to stop playing – I was hella spooked.

There’s good voice acting as well. The guy playing Luca has a pleasant voice that’s easy to hear and doesn’t sound like he’s overdoing it. It’s quite authentic.

The ambient noises setup a tense environment where I was jumping at the stupidest sounds. By making the environment fairly devoid of music and noise, the most emphasized sounds raise your fears such as a chair scraping. The demo did a great job of building tension. There was a point where I screamed “shit” after a long build up to a jump-scare and bounced in my chair, ending up scaring my father behind me.

The biggest issue in this demo is that the jump-scares were always happening. At the end of the demo I could almost predict them. Nearly 100% of the time interacting with an object will result in some form of jump-scare accompanied with a blaring noise. I think the graphics and sound design don’t need jump-scares to elicit fear in players.

There was a part where lights flickered and candles lit themselves – that’s scary. Taking a photo of something and seeing a chair floating in the photo when it shouldn’t – that’s scary. Turning around to see the chair is facing you when clearly it faced the other way just moments ago – that’s scary as shit! Jump-scares are scary but easy, cheap and unmemorable. It’s a bit lazy to be frank.

This demo showed what just 2 developers are capable of. It’s astonishing how good the models and sound design is. The gameplay could use some tweaking and the jump-scares should be toned down. If the devs balance the ambient horror with jump-scares it will be a terrifying game. The story itself is really intriguing thus far and I do think MADiSON would be a successful psychological horror game if it focuses more on the psychological aspect and less on the horror jumps in its final release.

Get the demo here: https://madisonvideogame.itch.io/madison-demo

Megan here! I am pretty well versed in all things weaboo and geek. I've loved videogames since I was born and even made my own for my 3rd year of Multimedia at the University of Pretoria in sunny South Africa. I have enjoyed anime from the days when Pokemon was considered satanic and Aniplex used to exist on DSTV. In the past couple years I have really gotten into manga, particularly Berserk to see where the story headed after the original anime. If there's one thing I will always love 110% it is cats. Don't doubt my faith in my love for felines.
Previous Toy Fair 2018: My Arcade continues classic cabinets with more Data East and Bandai Namco
Next The BG Game of the Month for January 2018 is Monster Hunter World 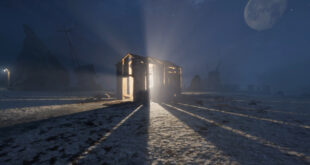