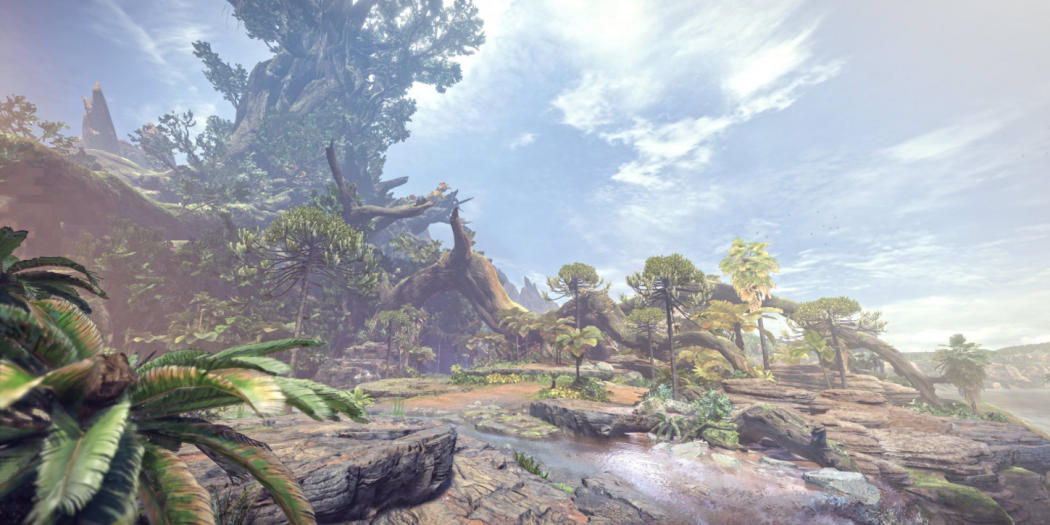 There wasn’t all that much hitting retail this past January, but there were a few sparkly gems in there nonetheless. And our favorite out of all of them was Monster Hunter World.

Personally, I think Monster Hunter is kind of an acquired taste. I don’t know anyone who doesn’t work on this site who plays it in any form. But that’s me. The fact is that Capcom’s beast hunting series is a fan favorite.

While it’s a bigger hit in Asia, it’s been creeping westward and now has a substantial audience. We have a few staffers who were waiting with baited breath to get their hands on a copy, including one who valiantly tried not to buy it (but failed).

So what makes Monster Hunter World so great? Well, it looks fantastic with some gorgeous graphics and monster designs, but it’s packing more than that. MHW also has a wide open world to explore, and that’s a first for the series.

In that way, I guess it’s also a pretty solid jumping on point, if you’ve never tried a Monster Hunter title before. Here’s a taste of it in action:

And the runners up…

It kind of sounds like there were a lot of great games last month from this article, but trust me there were not. Still, we did manage to find a pair of runners up for BG’s GotM prize.

Taking the silver was Street Fighter V Arcade Edition. This revamped and updated version of the PS4-exclusive SFV offers something the original version of it did not – an arcade mode. And this is a true arcade mode in every sense of the word. Actually, it’s even more than that

The game gives players the choice of playing arcade modes modeled after every past major iteration of the Street Fighter franchise – even the original! It’s a really neat little touch, and one that adds a lot to the game overall. There are also other improvements and some new characters too, but it’s that selection of arcade modes that makes this one a fighting game that’s finally been fully realized.

The bronze for January is also a fighting affair, but one that’s very different from the one above. It’s Dragon Ball FighterZ.

Bringing the Dragon Ball action back to the PS4 and Xbox One, FighterZ offers fans fighting gameplay moulded in the animated style. This game looks seriously good, at times it’s actually indistinguishable from the original anime. And of course, it’s got all the staple Dragon Ball action and signature moves.

Have a look at the launch trailer:

Jason's been knee deep in videogames since he was but a lad. Cutting his teeth on the pixely glory that was the Atari 2600, he's been hack'n'slashing and shoot'em'uping ever since. Mainly an FPS and action guy, Jason enjoys the occasional well crafted title from every genre.
@jason_tas
Previous MADiSON Demo (PC) Review
Next Episode 30: Lots of Comic News