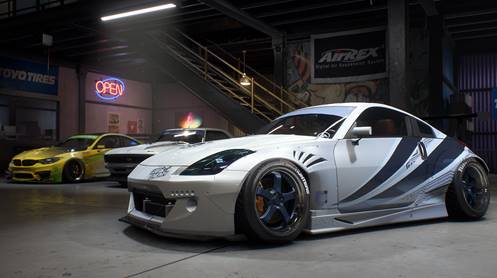 The latest Need for Speed game, Payback is the latest EA title to be on the receiving end of a series of tweaks. Here’s how in-game progression has changed since the game hit stores.

I don’t know if this news is entirely a good thing or not. I’d have preferred it if EAs big Holiday titles didn’t need any post-launch “fixes”. But this being the day and age that it is, that’s what we’ve got. Star Wars Battlefront II got a big alteration just last week, and now it’s Need for Speed Payback’s turn.

Payback hasn’t gotten anywhere near the level of online fan-hate that Battlefront II did. That led me to believe it was pretty well-received. Apparently though, that’s not the case. EA has announced that they have altered the player progression system (sounds familiar).

So what has the alteration done exactly? Well…

These range from decreasing the amount of time for parts to refresh within the tune-up shops to the way events, bait crates and roaming racers work. Players in Ranked Speedlists will also notice an increased amount of parts being paid out. Win the Speedlist and you’re guaranteed a new part, while simply participating means you get more chances of receiving an item of your own. We’ve already pushed a number of these updates live and will continue to listen to our players to make Need for Speed Payback the best experience possible.

Soon players will see a client-side patch going live and will benefit from a range of updates including improved game performance, multiple fixes to improve stability and tune-up shops stocking a higher quality selection of parts. To keep an eye on the latest information you can check out the Need for Speed Twitter and find the full list of changes on the Need for Speed blog.

There you have it. Quite a bit has been changed up/added, and it seems as though the rolling alterations will continue. It’s always nice to see a company actually making changes according to fan input. I say that knowing full well the situation here too. There are many who’ll dismiss all of this solely because we’re talking about EA. I can see why too.

They’re a massive company after all. And one that many gamers seem to see as a predatory one. Or at least, they see these latest moves as being in that vein. But if the game has been changed for the better, isn’t that a good thing? And if EA is actually learning from all this, isn’t that a “win” too? I don’t know, sort of makes me want to pick up a copy a little more.

Jason's been knee deep in videogames since he was but a lad. Cutting his teeth on the pixely glory that was the Atari 2600, he's been hack'n'slashing and shoot'em'uping ever since. Mainly an FPS and action guy, Jason enjoys the occasional well crafted title from every genre.
@jason_tas
Previous Dark Horse celebrates Cyber Monday with Mega-bundles
Next Entertainment Earth’s Cyber Monday has stretched into Tuesday