NYCC 2017: Marvel rings in Guardians #150 with the return of Adam Warlock

There are quite a few classic Marvel Comics characters returning these days, and Adam Warlock is next in the pages of Guardians of the Galaxy. 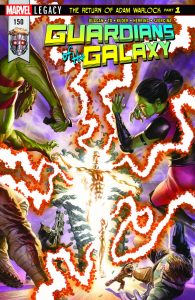 Adam Warlock is returning to the galaxy…but the mystery surrounding his return remains. Is he here for the Infinity Stones? Has he come to take them back for himself? The Infinity Stone saga continues in GUARDIANS OF THE GALAXY #150: THE RETURN OF ADAM WARLOCK PART 1, written by Gerry Duggan with art by Marcus To & Aaron Kuder.

That’s just about all the info there is on Warlock at the moment, but it’s just freaking cool knowing that the cosmic hero is coming back. He’s been around for a good long time of course, so it’s not like he’s a new hero. He even appeared in a few of the company’s biggest crossovers (Infinity War). It’s just that he hasn’t been seen in a while.

Again though, there isn’t much else to talk about at the moment. Just that it should be cool to see him in the pages of Guardians, since he’s had history with a good chunk of the team. Also cool and noteworthy, is that this big return is taking place in the 150th issue. And man, is it nice to see those big numbers again on a Marvel book.

From Gerry Duggan and Aaron Kuder, Guardians of the Galaxy #150 should be one not to miss.

Jason's been knee deep in videogames since he was but a lad. Cutting his teeth on the pixely glory that was the Atari 2600, he's been hack'n'slashing and shoot'em'uping ever since. Mainly an FPS and action guy, Jason enjoys the occasional well crafted title from every genre.
@jason_tas
Previous Get an education in the new Rogue Trooper Redux trailer
Next Check out the five-cover series in store for Phoenix Resurrection