Classic Red Skull joins Wolverine as fall exclusive for One:12

Mezco Toyz’ One:12 Collection keeps on rolling, as another exclusive joins its ranks. This time, it’s the villainous Red Skull in his vintage togs.

The Red Skull of evil

We just reported yesterday that a yellow and blue Wolverine would be joining the One:12 Collection as an NYCC (and internet) exclusive. And now here we are a day later with yet another One:12 figure that you’re probably going to want to add to your collection.

This time, Mezco is offering a villain in the form of the original Red Skull. As with Wolverine, we’re actually already getting a figure of Skully, though it’s a markedly different one than this.

The Red Skull that’s been waiting in the wings (scheduled to ship this fall also) is dressed in a more modern style. That’s the one with the long “leather” coat. This one, as you can see, actually mimic’s the character’s first appearance look, as seen in classic Cap comics.

He’s decked out in a Hydra-green jumpsuit, which is fits with what the villain wore in his early days. He’s also loaded with accessories, same as the “modern”, standard release version. 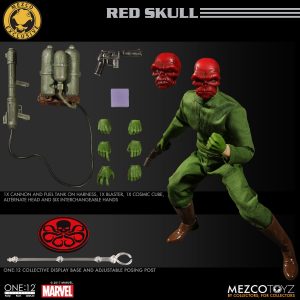 The fall exclusive Skull is available for pre-order right now on Mezco’s webstore, and will also be at their booth at NYCC. You can find him in person this October at booth #1954. If you really want to make sure you’ll get one though, I’d recommend going the we route. Exclusives at Comic Cons tend to sell out quick. And as Mezco points out, once the allotment is gone, it’s gone.

Jason's been knee deep in videogames since he was but a lad. Cutting his teeth on the pixely glory that was the Atari 2600, he's been hack'n'slashing and shoot'em'uping ever since. Mainly an FPS and action guy, Jason enjoys the occasional well crafted title from every genre.
@jason_tas
Previous Final Fantasy XV dev team aiming for future gen consoles with next project
Next Episode 11: The Nindies Are Coming