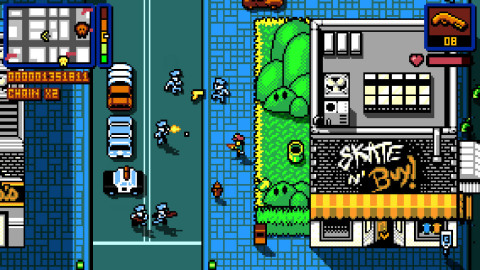 Nintendo Download: Go on a Rampage with Retro Classics

Retro City Rampage makes the jump to Nintendo Switch this week, along with some decent late-summer sales.

Chances are, if you’re a gamer who’s into the kind of game that this is, you’ve already played Retro City Rampage. This is the DX version of the game, which is basically an action filled journey into the 8bit past of gaming.

It’s pretty fun from what I remember, and plays off of a bunch of classic games. Yep, that means there are plenty of unofficial crossovers, and more than a few things that’ll scratch that nostalgic itch.

If you missed it, or could use another go around with it, it’s a solid pickup. It’s one of a bunch of games to hit the Switch this week. RCR is easily the biggest name in the group though, as the rest include titles like Strikers 1945 and Aero Fighters 2- the Neo Geo game of the week.

Honestly, what do you expect? It’s August. New stuff is a few weeks off (at least).

Jason's been knee deep in videogames since he was but a lad. Cutting his teeth on the pixely glory that was the Atari 2600, he's been hack'n'slashing and shoot'em'uping ever since. Mainly an FPS and action guy, Jason enjoys the occasional well crafted title from every genre.
@jason_tas
Previous Harbinger Renegade #6 (Comics) Preview
Next The Art of Harley Quinn book on the way from Insight Editions