Are you ready for an adventure?! With Sonic?! Yes, we’re looking all the way back to the birth of the Dreamcast for a Retro Review of Sonic Adventure.

Sonic Adventure released as a launch title for the Sega Dreamcast in 1998. It seems that launch titles don’t exactly stand the test of time. The current console generation has proved that in just a few years: Knack didn’t quite stand up even when it first released on PS4.

Now nearly 20 years on, and Sonic Adventure is no longer (if it ever could really be considered as such) a technical marvel. Every spot that the game breaks down in terms of graphics and controls, it steps it up on other fronts like level and character design and allowing players to play through seven distinct campaigns.

A true adventure for the ages

Sonic Adventure is a massive and sprawling game. 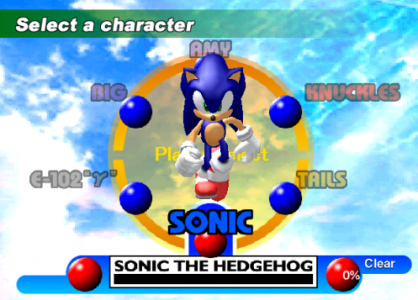 When the game starts up, you choose which character to play as. Sonic, Knuckles, and Tails all make appearances. The game also allows some other playable characters: Amy, Big the Cat and E-102 Gamma, a robot whose initial purpose was to serve Dr. Robotnik.

Each character has specific abilities and upgrades to find, and their levels all play in vastly different ways. Sonic and Tails are basically simple traversal levels. Knuckles searches for pieces of the shattered Master Emerald. Amy has a big hammer, Gamma shoots his way through levels and Big gets to go fishing.

None of the campaigns are overly long. Even with the cooler characters like Big (? -ed) and Sonic, that is a relief, because the levels would get boring after too long.

Players traverse maps connected by certain doors. These give the feeling of being free without the crushing overwhelming feeling that comes with most open world games.

The characters, not just the playable ones, are amazing. Chaos, a shapeshifting water-monster, is the main antagonist aside from Dr. Robotnik, and the final boss fight of the game stands up to be one of my all time favorites in any game ever.

Where the shoes hit the sand…

Not everything in Sonic Adventure is rosy. While the game has a great concept and design in levels and characters, gameplay is rough in 2017.

So, lets hit this from the ground up. Seven characters means that there are seven different control schemes. If this was done well in 1998, and I don’t remember anything to tell me otherwise, those same controls don’t nearly hold up in 2017. Three dimensional platforming is a lot tougher to get right than two dimensional. Even staples of the genre, like Super Mario 64 don’t hold up very well.

Therefore, it’s probably safe to say that the platforming in Sonic Adventure is not up to snuff. Different characters have better and worse platforming. For instance, the Sonic levels feel better as Sonic than they do with Tails. The Amy levels are probably the weakest due to her hedgehog controls and slow speed.

The controls aren’t necessarily weak, but they don’t stand up the way two dimensional games do. They are clunky and slow, even when you’re playing as Sonic.

The controls would likely be a lot better if the entire game focused on one character. Alas, we get Sonic and Big the Cat in the same game.

And the last bit of gameplay complaint that I have, is that sometimes moving through the world to find the next level is difficult to do. Though I have to add that sand surfing and snow boarding are awesome additions, breaking up the gameplay at integral spots.

The presentation is… off

The presentation in Sonic Adventure is laughable at best and cringe worthy at worst.

Sonic Adventure takes place in a world where humans and hedgehogs inhabit the same place. This is weird and jarring and feels a little unnecessary, but its also incredibly goofy in a good way. The voice acting is where problems emerge, though.

This game has janky voice acting, poor graphics and usually subpar music. Boss music is great, though. If the game looked good in 1998, it looks kinda bad now.

I wouldn’t be doing this review justice if I didn’t mention the Chao garden. 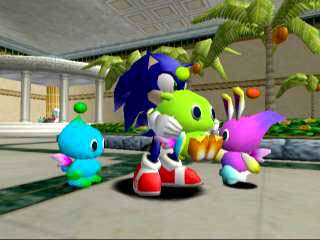 The Chao Garden is a wonderful land where the player gets to raise Chao. Think of Gremlins that haven’t turned mean and evil.

They are awesome. This is a great mini game, and if Sega announced a Chao Garden for Sonic Forces I might throw up.

Sonic Adventure is supremely questionable in 2017 in terms of quality. The concept and design elements are great, but game play, mechanics and presentation are pretty horrible. If you want to raise tiny adorable gremlins though, this is one of the only games that lets you do that.

Erich was introduced to gaming by his grandfather before he could walk. Since then, he has grown up loving Nintendo and most games in general. He couples his love of videogames with journalism to cover news, provide reviews and tell it how it is in the gaming world.
Previous Black Butler: Book of the Atlantic (Anime) Review
Next Age of Empires Strikes Back: Original Game Remastered