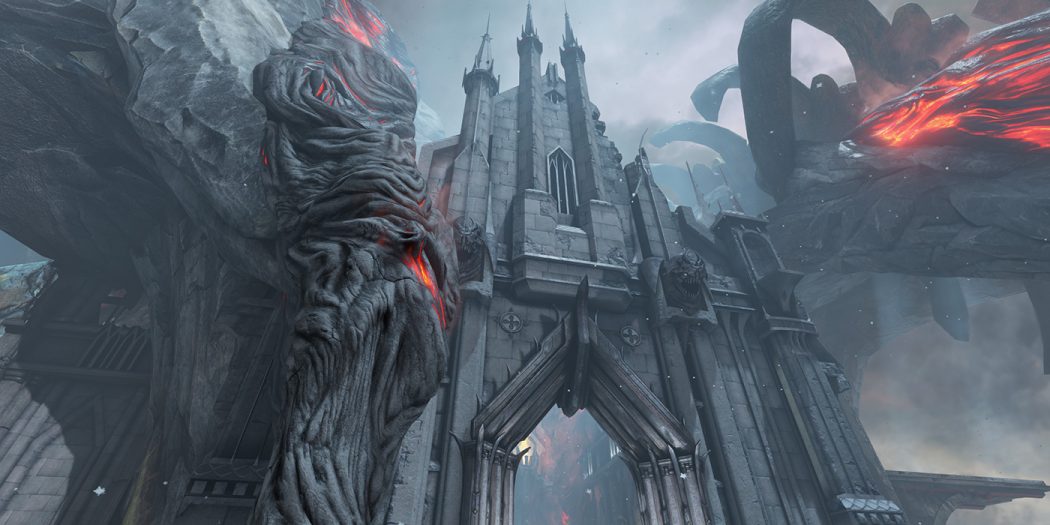 So there’s a new Quake Champions trailer, showcasing the Burial Chamber map. It reminds me a lot of Doom, and simultaneously makes me pine for a campaign.

There’s a great sense of just how fast Quake Champions is going to play in this trailer. QIII was similar in that way, so haste is nothing new to the series, though it seems to be amped up here. Champions looks like it’ll lean even more on speed and fast-as-lightning action. That should make for some fun times online, especially with Quake’s eclectic blend of weaponry.

Speaking of, that leads us to the map that’s being shown off here, the Burial Chamber. And man, does it look -and sound- cool.

The bones of a massive beast decorate the entry to this massive tomb. Hazardous platforms at the Perilous Outcropping dot the sea of lava, providing an ideal sniping spot for those skilled enough and brave enough to make the leap. With its winding tunnels and low ceilings, the claustrophobic grave sites of the Molten Underground offer up the opportunity for heavier Champions to do some serious splash damage, while the Lava Falls could provide an excellent chokepoint for skilled tacticians. Just be careful to avoid being pushed into the lava, which is a prevalent threat throughout the map.

One thing with all of this though, is that it really, really (really) makes me want another Quake single player experience.

I don’t know if that’ll ever happen, since Quake isn’t really a series of sequels – more like sequential one-offs. Yes, Quake 4 expanded on the story playing out in Q2 (with mixed results), but the original game never really had much of a narrative to begin with. And it never went anywhere either.

It was more or less just a series of loosely connected levels, all with a kinda-sorta similar themes. I’d play the hell out of a reboot though, ’cause as simple as the original was, it was just as fun. For that matter, I wouldn’t mind seeing a continuation either, that added in more depth for the single player campaign. Even something along the lines of what Bethesda is doing with the new Doom would work fine. Just something. Seriously Bethesda, I need more SP Quake like yesterday.

Not that this is a story about that, since we’re talking Quake Champions here. And that is a game that’s very much heading towards release. To that end, Bethesda is almost ready to launch into the Closed Beta for the game. If that’s something that interests you, then you’ll want to head right here to the official Quake Champions site, and sign up. Time’s a running out you know.

Jason's been knee deep in videogames since he was but a lad. Cutting his teeth on the pixely glory that was the Atari 2600, he's been hack'n'slashing and shoot'em'uping ever since. Mainly an FPS and action guy, Jason enjoys the occasional well crafted title from every genre.
@jason_tas
Previous Nick Fury #1 (Comics) Preview
Next Brand new map pack has arrived for Call of Duty: Modern Warfare Remastered