So Barry and the team keep learning more about Savitar and how to change the future. Find out what’s next for the team in The Flash Duet.

This crossover episode between Supergirl and The Flash begins with Barry hanging out on the couch watching 1952’s ‘Singing In The Rain’, remembering watching the film with his mother as a child. He’s bummed out after breaking off the engagement with Iris, and Cisco’s efforts to cheer him up are flailing. Though before they can get too deep into conversation, they get a call from HR to meet back at Star Labs.

A portal has opened, and they were waiting to see who was coming through. Is Gypsy back with more bad news? Not this time. We find the Martian Manhunter J’onn J’onzz, as well as Supergirl, being carried by Mon-El of Daxam. Supergirl has been rendered unconscious. They don’t know how, only that the attacker fled to Flash’s Earth.

While the team is going over what happened to Supergirl and how her attacker appeared out of nowhere, he proceeded to do the same, as witnessed in the monitors of Star Labs. Barry and Wally go to meet the intruder, where they are told that the strange man wants to ‘teach them all a lesson.’ He then proceeds to use his enhanced speed to knock Wally out of the room, halt Barry mid-run, and put Barry in a similar coma as Supergirl. 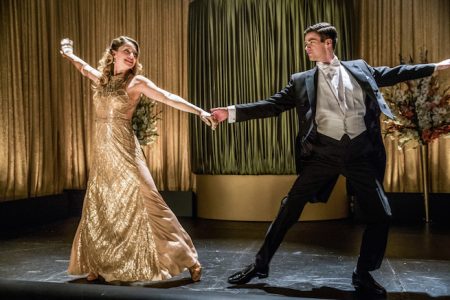 Barry wakes up in what appears to be a mid-twentieth century nightclub, complete with live entertainment, provided by the one and only Supergirl, singing Moon River. They lock eyes during her performance. At least they still recognize one another, that makes things slightly less difficult, being wherever they are.

Just like in the Wizard of Oz film, they are surrounded with familiar faces in different roles: Malcolm Merlyn is the club owner, Cisco is a waiter, and Winn is the piano player. Winn gives the duo an insight into what sort of man Merlyn is in this reality. They have found themselves trapped into a musical, existing in only their minds. That is what our mysterious attacker has done.

He appears as a projection to inform our heroes of what has happened and where they are. If they can get through the plot of their script, they can get back to reality. Now they just have to figure out what that means for them.

Which Way Is Up

Just then the duo is kidnapped by Stein and taken to Joe West, who in this reality runs the town a la Al Capone. His daughter has gone missing, and Barry and Kara are recruited into helping him find her. So detectives they become.

Cisco leads Barry and Kara to the room where the man’s daughter is hiding out. She is cuddling with Mon-El, she was not kidnapped. Meanwhile, back in reality, Caitlin Snow realizes that their attacker is draining the two superheroes of their superpowers.

Wally prepares to head out and face their new threat, when Cisco joins in. They are unaware of J’onn’s true identity, so they try to talk him out of assisting. Mon-El laughs that J’onn is ‘more than just a pretty face.’

It takes all three to come up with a way to subdue our mystery man. Barry and Kara learn that Iris has no intention to going back to her father. A Romeo & Juliet-esque forbidden love story unfolding before them. 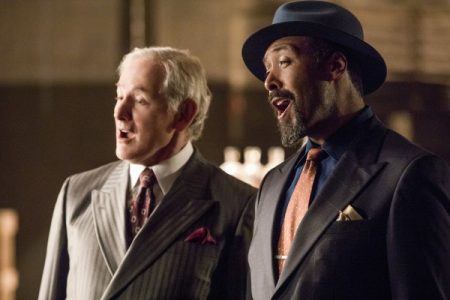 A dramatic reveal before all parents unfolds, complete with their fathers singing of their feelings. While the fathers may have calmed the nerves of their children, they have no intentions of playing nice with one another. War has been declared.

Now no musical would be complete if it didn’t feature a song and dance from the lead roles, even while a shootout takes place outside the venue. All the commotion sends Barry and Kara’s bodies crashing, as they have both been shot. Iris and Mon-El decide that they have to go into this fantasy world in order to save their friends.

As our heroes lay dying in the streets of their imagination, they admit their feeling for their loved ones, sealied with a kiss. Apparently this was the magic release the trickster had in mind all along. The trickster claimed that he needed to teach a lesson in love, and thereby mend two broken hearts. Love is about letting yourself be saved, not just to save others.

And with that, everything is right with the multiverse again. All thanks to a mysterious man named the Music Meister. Wrap it all together with a new, heartfelt proposal from Barry to Iris.

Whjle I am not a fan of the musical-episode phase, this was an entertaining one. Well composed, and only felt somewhat far fetched. It was cute that they used childhood memories of movies and musicals to tie the worlds together.

A fan of media on multiple platforms, I am always watching or playing something! Who knows what I will be on to next?
@mackeyp42
Previous Brand new map pack has arrived for Call of Duty: Modern Warfare Remastered
Next Introducing CORSAIR ONE From Corsair…