The Flash The Wrath of Savitar S3E15 (TV) Review

Last time, Team Flash was able to pit Solovar against Grodd, and forego the Earth-1 invasion. At the end we saw Savitar approaching Kid Flash. And Barry popped the question. Let’s see what happens in The Flash The Wrath of Savitar.

Central City is welcoming the speedsters with open arms. Going so far as to have a promo at the edge of town claiming ‘Home of The Flash and Kid Flash.’ Barry, Jesse and Wally are running time trials around town, trying to see how fast they can get. Wally needs to be able to subvert Savitar from killing his sister. Wally keeps getting faster, but is he fast enough? And what the rest of the gang doesn’t realize, is that Wally spotted Savitar keeping tabs on them as they crossed the finish line. What does this mean for our team’s plans? 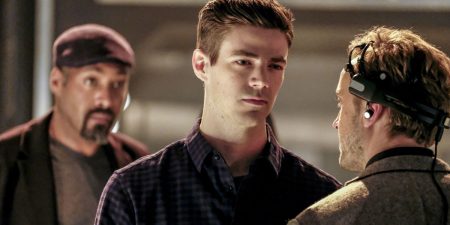 Iris and Barry gather everyone at the lab to reveal their big news. Everyone is elated by the reveal, though Joe has a minor issue with Barry over the details. Just as they are getting into the explanations, a fire calls the team away. However this time something is different: as Wally and Barry head to the scene of the fire, a flash of white light knocks Wally to the ground. Wally was not merely tripped, he was attacked. Thrown against the wall, and when expecting more attacks, Savitar is gone, and Barry is asking what happened.

Back at the lab, things are not getting any better. Barry and the group are trying to understand what is going on. Wally is apologizing for keeping things to himself. Even Cisco gets in on the action, talking about how Savitar’s influence keeps creeping into their lives. Wally and Barry keep butting heads, and Barry tells Wally he’s out of the group, until they can get a handle on things.

It takes some coaxing, but Julian allows himself to be used as a conduit to commune with the speed god. And what a conversation they have. Savitar knows that the team has been trying to change the future. He claims that Iris is still going to die. He even tells Barry that he becomes who he is, because of the actions of the entire team.

One will betray you. – Savitar

Savitar makes a comment about the Philosopher’s Stone not being lost, so now the gang is on a hunt. Barry tracks down one of the Acolytes, who says Savitar is leaps and bounds ahead of Flash. Meanwhile, Wally is unable to repeat his speed from the earlier trial. Wally and HR determine that Kid Flash needs to see the events of the Savitar vision. Hopefully this will allow him to overcome his newfound fear. 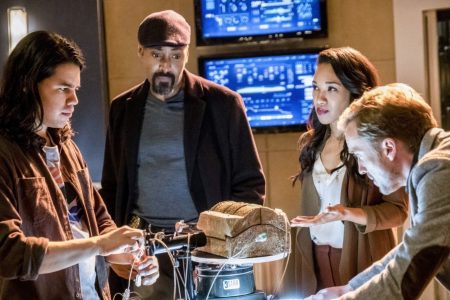 Cisco and Wally revisit the scene, and as expected, Wally is shaken by the events. Though he also notices details that have not been addressed previously. Confronting Barry about his omission causes a rift between Barry and Iris. Julian and Caitlin worry over Savitar’s comment of ‘one will betray you’. Julian has been manipulated before. But Caitlin has been holding back something from the team. She has been holding on to a fragment of the Philosopher’s Stone, trying to cure her powers.

Once again they channel Savitar through Julian. The team wanted to use a little misdirection, while locating where the speed god would be hiding. This does not go as well as planned. Across town, Wally is talking through what’s on his mind with Jesse. However, Wally continues to have visions of people who are not there. This cannot be good for anyone. His vision of his mother is crushing his will to save his sister.

Wally takes off to confront Savitar, and during a heart-to-heart conversation between Iris and Barry, Barry is able to piece together where Savitar is. And he now believes he knows what it is Savitar is after – Caitlin’s piece of the stone. Sadly, Wally’s visions of Savitar were enough to convince him to throw the stone into the speed force. This lapse in judgement led to him being sucked into the speed force, and releasing Savitar once again. The two battle again, before Savitar taunts Barry once more.

We always suspected that something more was going to happen with Savitar. I for one did not see it being Wally getting sucked into the speed force. Barry and Jesse are going to have to up their game if they are going to catch him. He certainly seems to be ahead of everyone else. HR will probably come up with some oddball scheme that is just far enough from normal that Savitar wouldn’t have thought of it. We will have to keep watching to know for sure.

A fan of media on multiple platforms, I am always watching or playing something! Who knows what I will be on to next?
@mackeyp42
Previous 1-2 Switch Eight Games Hands On
Next New Character Reveals In Injustice 2 Trailer