Hanna-Barbera cartoon characters are getting some interesting makeovers from DC Comics. Here’s your first look at none other than Snagglepuss.

You remember this guy, don’t you? That big lavender-shaded cat? Well, he’s back, and he’s not alone. Snaggs will be joined by some big names from the toony-past. Actually in some cases, huge names, all of which will be joining DC’s already running Flintstones book.

Add to that Snagglepuss, which’ll be from Mark Russell and Howard Porter, and you have a startlingly impressive lineup of talent. All of the above will be first delivered in bite-sized format. That should give you a solid taste of what’s to come.

Each of the new tales will be first told in 8 page stories. And they’ll be included in DC’s Annuals slate, which is arriving on March 29th. And these won’t be strictly for kids either, as it sounds like the silly Hanna-Barbera toons of yesteryear are getting a 21st century makeover.

Mark Russell recently revealed in an interview with HiLoBrow that his concept for Snagglepuss is as a Southern gothic playwright working with an ensemble cast of cultural figures, exploring an intensely creative time in the New York City theater scene of the 1950s. In Russell’s eight-pager, Snagglepuss faces the House Committee on Un-American Activities. Stay tuned for the complete sampler, but enjoy a first look at SNAGGLEPUSS! 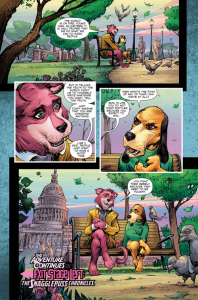 Jason's been knee deep in videogames since he was but a lad. Cutting his teeth on the pixely glory that was the Atari 2600, he's been hack'n'slashing and shoot'em'uping ever since. Mainly an FPS and action guy, Jason enjoys the occasional well crafted title from every genre.
@jason_tas
Previous Ghost in the Shell Big Game spot is now online
Next The Nintendo Download brings a Woolly World