Metal Gear Solid has always been a series whose narrative relies on imagery, as much as it relies on their phenomenal voice actors and Kojima’s masterful storytelling.

A masterpiece of a franchise

What’s the reason behind Metal Gear’s success as a video game franchise? To me, that lies in the fact that we are able to experience it through the eyes of brilliance. By that I mean the people behind Kojima Productions. We’ve seen things the way they wanted us to see them. We felt emotions that they wanted us to feel, at the most crucial moments.

I’m a gamer who’s played this franchise from Metal Gear Solid (PlayStation) all the way to MGSV. I love the franchise, and for me, the ending of this opus has been both poignant and satisfying. It ended the way I expected it to. The fifth MGS answered my long-standing questions as well as gave me more things to think about. And I mean that not just as a gamer but as a person as well.

The symbolism behind the storied franchise has always been a hot source of debate. That’s especially because of Kojima’s tendencies to be cryptic when he wants to be (so, all the time then? -ed).

This is demonstrated in its entirety during the time Kojima Productions was teasing the release of The Phantom Pain. The game was then-announced as an IP by Moby Dick Studio. After months of speculation, this was all revealed to be a grand marketing strategy that the Kojima team employed. And it worked beautifully.

The artistry of tactical espionage action

The reason why I’m talking about Metal Gear’s past is because I just finished perusing (for the second time) The Art of Metal Gear Solid V, published by Dark Horse Comics. Metal Gear has always been a huge part of my life because it shaped me to the gamer that I am today. It taught me that it was okay to have expectations as a gamer. And it also taught me that video games can be a satisfying form of storytelling, so long as they are done right. 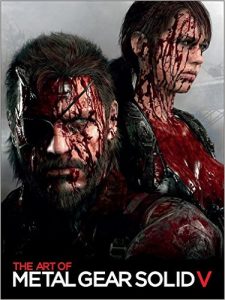 This hardcover book from Konami and Dark Horse proves to be a meaningful successor to Metal Gear Solid V. That’s true because, while it only features the game’s art, it was presented in a way that allowed me to relive the greatest moments of Metal Gear Solid V through imagery. My imagination did the rest of the work. The artwork is great in itself by the way. Clearly that’s because this was created by a supremely talented team, but also, the appeal that is Metal Gear Solid has yet to die down, not for me anyway.

As an art book, this one is fairly detailed.

It covers Ground Zeroes, The Phantom Pain, Kingdom of the Flies (the unfinished “true” conclusion to Metal Gear Solid V), as well as some unreleased concept art and assets. I’ve always wanted to see the design process that went into the conceptualization of characters such as Quiet and Punished Snake himself, and seeing them for myself was a unique experience which I found fairly pleasant.

The Art of Metal Gear Solid V succeeds where the next Metal Gear Solid will fail. It manages to evoke a sense of nostalgia in gamers, while allowing them the opportunity to revisit the art of the video game opus that is The Phantom Pain.

The brilliance of Shinkawa

Of course, the crème de la crème of the art book is the foreword from Metal Gear Solid’s legendary artist himself, Yoji Shinkawa. What really evoked the most emotion in me was reading Shinkawa’s thoughts on his final game in the series. I felt for him, because I was with him on the epic ride that was Metal Gear Solid. From Shadow Moses to Afghanistan, every step of the way that they led, I followed.

Shinkawa’s message allows a rare glimpse into the mind of one of the greatest video game artists of all time. And it makes this artbook all that much more meaningful, in addition to its fantastic artwork I mean.

The art book, by itself, is a treasure trove filled with wonderfully drawn or rendered assets from Metal Gear, and all of them are extremely well detailed. You can buy the book solely for this reason or simply because you like collecting artbooks.

I however, have a different view. The book is a source of sentimentality for a gamer like me. I’ve loved Metal Gear for the longest time, and this book is something that every fan should have in their bookshelves.

Benj likes video games, neckties and scotch. His favorite games include Resident Evil 2 and Final Fantasy VIII. You may contact him at [email protected]
@ggburroughs
Previous Resident Evil 7 Aunt Rhody trailer…
Next Get the biggest Transformer ever for less than ever