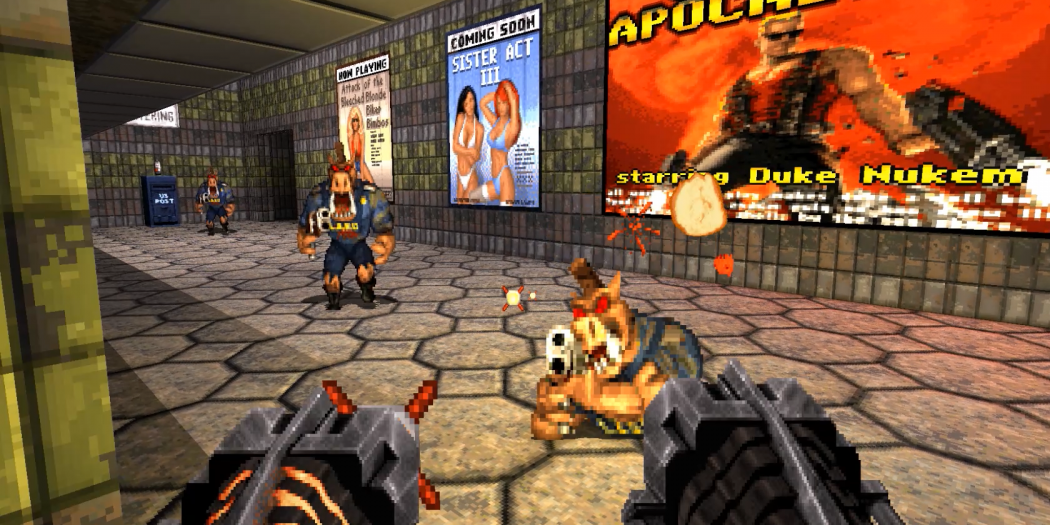 Gearbox’ revamped version of the classic Duke Nukem 3D is back and better than ever.

Duke Nukem is here to kick ass and chew bubblegum

“We feel there isn’t a better way to celebrate 20 years of Duke Nukem 3D than to get the original team back together and provide this love letter to Duke fans,” says Steve Gibson, head of Gearbox Publishing. “With all-new content built on top of what is undeniably one of the most iconic first-person shooters in gaming history, this is the ultimate Duke Nukem experience for both seasoned fans of the title and gamers from a new generation experiencing it for the first time.”

Not bad Gearbox, not bad at all. After a less than stellar Duke Nukem Forever, the King goes back to basics for his 20th anniversary edition. And not only do you get the base game, but because this is no simple re-release, you also get those new levels. All of them seem to fit in with that classic title perfectly too.

“Amsterdam, Moscow, Paris, Egypt, San Francisco and more” make up the new maps, for a total of eight. While the new episode (Alien World Order) might be new however, you’re already more than familiar with what you’ll be doing in it. Namely, you’ll be kicking alien scum in the teeth and shooting them many, many (many) times with high powered weaponry.

While we’re talking about those new maps though, it’s worth reinforcing is that they were crafted by the original designers. So there’s a reason they look so seamless.

Duke Nukem 3D: 20th Anniversary Edition World Tour is now available digitally. You can pick it up for the PS4, Xbox One, and PC. Oh, and it’s coming to physical disc too (bet you didn’t see that coming). Landing at retail on October 18th, the boxed edition will be offered in both Xbox One and PS4 formats. You’ll have to go to GameStop to get it though, as it’s exclusive to game-centric chain.

Jason's been knee deep in videogames since he was but a lad. Cutting his teeth on the pixely glory that was the Atari 2600, he's been hack'n'slashing and shoot'em'uping ever since. Mainly an FPS and action guy, Jason enjoys the occasional well crafted title from every genre.
@jason_tas
Previous Chimichanga: The Sorrow of the World’s Worst Face #1 (Comics) Review
Next Toy Odyssey: The Lost And Found (PC) Review