Nintendo’s original handheld celebrated a birthday last week, as it turned a ripe 27 years old, and we’re donning our rose-tinted glasses to have a fond look back.

I remember that commercial well, maybe a little too well. I always thought it was odd that the robot-guy beamed that kid into existence, and then got killed by him. And over a game of Tetris no less! But I digress, because overthinking aside, that was pure magic. And really, so was the GameBoy. Sure it’s smeary screen and green-tinted graphics might look antiquated now, but back in 1989? Well, let me tell you, the GameBoy was a revelation.

Back then, portable game systems (and I use that term very loosely) had one game built in, and couldn’t accept different cartridges. So you were stuck with whatever that one game might have been.

And the quality was nowhere even remotely close to what you’d get from something like the NES, or anything else that you’d get at home. Basically, portable games just bleeped and blooped, with one or two points of animation per character as the ‘action’ played out on the LCD screens. Stories? What are those? 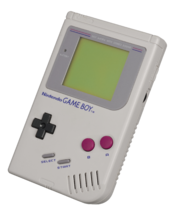 All that was true, until the GameBoy arrived and ushered in the age of the portable console. You could swap games just like at home, and you could actually play games that were more than just simple shooting galleries. These titles had levels to play through, more than one or two enemies, and everything else that you’d have expected from a modern (for the time) video game… well, except for color anyway.

The GameBoy’s two major flaws were that it’s graphics were presented in green and yellow, and that it had no backlight, which I always though was an odd omission. The Sega Game Gear fixed both of those issues when it hit retail just about a year later of course, but Nintendo’s little system didn’t really care much about those issues, and soundly drubbed the GG, lasting until it received its first major revision in 1996.

That was the year of the GameBoy Pocket, which was basically the same unit, but with a smaller footprint and a better, bigger screen. The GameBoy Color came next in ’98, adding color graphics to the mix, though I still don’t know if it really needed it.

When you think about it, the GameBoy, basically unchanged, lasted from 1989 through ’98. Nine years of dominance… though Nintendo was just getting started in that respect. The GameBoy Advance, which played games similar to 16 bit-era stuff was next, and then the 3DS took over. The rest, as they say, is history. And it’s really only now in the semi-twilight of the handheld niche of the industry, that we’re seeing any kind of slowdown. Blame mobile phone games for that.

Even after redesigns and successors though, there was really nothing like that original GameBoy. I remember spending plenty of car trips (do people still take those?) gaming away the miles on my GameBoy in the back seat, magnifier and light attachments affixed. 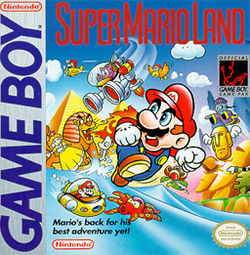 Super Mario Land one and two, Tetris (which my mother ruled at), and later on even the likes of Donkey Kong Country and Street Fighter, were all fantastic games that felt fresh and new. There’s really nothing like it that I can compare it to today. The GameBoy was innovative, plain and simple, and represented a landmark release that altered the video gaming landscape up to today.

So that’s all for me, and I’ll now turn over the floor to some members of the BG team, who are prepped to share some of their favorite games and best memories of the very first Nintendo handheld…

I never really owned a gameboy but my brothers did! They loved pokemon and I remember them play the legend of Zelda. And then…. the gameboy advance came out, and we experienced the golden sun games.

I had the 1989 World Series on while playing Super Mario Land. I totally missed out on the live, televised earthquake footage that hit the San Francisco area and took the game off the air. I looked up from the game and was like “what happened?” In my defense, Super Mario Land was pretty awesome.

Ahh, the Nintendo gameboy, what can be said about this system that hasn’t already been heard? I got my first gameboy when I was around three years old; a Gameboy Advance. I thought that life couldn’t get any better.

Two years later on my 6th birthday, however, I acquired what would be one of the defining moments in who I am, not only as a gamer, but as a person overall. I was given a Gameboy Advance SP with Pokemon Fire Red; this game somewhat prepared me for the challenges I would face growing older. 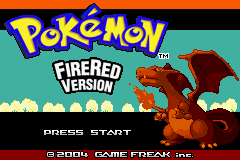 It was a journey, and frankly that’s the only way I can put it. Even now, twelve years later, I still go back to that very same game, only God knows how many playthroughs later, and find comfort in those familiar words…’Welcome to the world of Pokemon’

The GameBoy was a large part of my childhood gaming experience, as I imagine it was for most gamers my age. The portable console introduced me to some of my favorite franchises and got me through countless boring hours when I was with my parents on boring errands.

Jason's been knee deep in videogames since he was but a lad. Cutting his teeth on the pixely glory that was the Atari 2600, he's been hack'n'slashing and shoot'em'uping ever since. Mainly an FPS and action guy, Jason enjoys the occasional well crafted title from every genre.
@jason_tas
Previous Steve Rogers returns as Captain America next month
Next Brutal Roundup: 4/25 through 5/1