Japan and Europe will see the title a little later: August 25th and September 2nd, respectively. 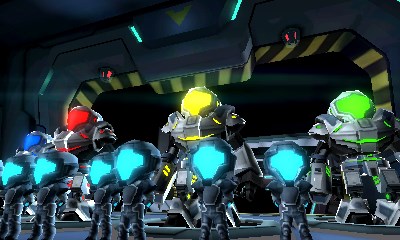 Metroid fans may have to continue waiting for the Metroid title of their dreams, but the wait is shorter for those looking for a co-operative title on the New 3DS. Metroid Prime: Federation Force is bringing its teamwork and Blast Ball to North America on August 19th, Japan on August 25th, and Europe on September 2nd.

While the outcry has been well-documented (see: everywhere), Federation Force’s co-op should be loads of fun for people eager for team-building exercises. On the heels of The Legend of Zelda: Triforce Heroes (which was super fun, and came supporting a full suite of Download Play options), Federation Force continues the cooperative trend recent 3DS games have been taking. It remains to be seen exactly how far Download Play will run a group with only one copy of the game (or if it supports it at all).

The mid-late August release date gives Nintendo plenty of time to try and make one last case for those naysayers- as for whether they succeed, it currently looks unlikely.

But for those of us who will take polished and fun co-op in any form, August 19th can’t come soon enough.

Brutal Gamer's Nintendo Editor began his gaming life a little late- at five years old. But he's made up for it in the two decades since, gaming and writing about gaming with the same passion, fervor, and unrelenting love as his five-year old self.
Previous Here comes a new (old) challenger! Guile Sonic Boom’s SFV this month
Next Tokyo Mirage Sessions #FE’s Limited Edition is on its Way