Steve Rodgers returns as (a) Captain America in new book

Drained of his super-soldier serum no more, the ‘real’ Captain America is heading back into action. But he won’t be the only Sentinel of Liberty patrolling Marvel’s universe. 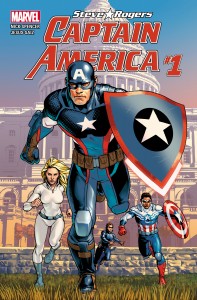 “It’s an exciting time to be writing Captain America, for sure– this year is the character’s 75th Anniversary, not to mention the upcoming release of Marvel’s CAPTAIN AMERICA: CIVIL WAR. And with CIVIL WAR II approaching in the Marvel Universe, it felt like the perfect time to restore Steve Rogers to his former self,” says series writer Nick Spencer.

Yes, if you were under some kind of assumption that Rodgers would never wield the shield again, then you’re in for a surprise. You also might be insane, as I’m sure Marvel was always going to bring him back to glory at some point, and on the eve of the latest Cap film opening is as good a time as any.

Now that Cap is back in action though (or will be soon), what happens to the current shield-slinger, Sam Wilson? A good friend of Rodgers and the current Cap, Wilson could just go back to his former alter-ego of Falcon, but that’s not in the cards just yet. No, instead there’ll be two Caps on the front lines of the Marvel U, both of which will have decidedly different flavors of narrative.

“CAPTAIN AMERICA: STEVE ROGERS and CAPTAIN AMERICA: SAM WILSONwill act as great counter-points to one another,” continues Spencer. “If you’re digging the topical, ripped-from-the-headlines approach we’re taking in Sam’s book, we’ve got plenty more of that to come. And if you’re up for a more timeless take, with Captain America facing off against Hydra and his classic rogues gallery, Steve’s book will be just the thing for you.”

I love this idea. Wilson has really come into his own as Cap, and the stories that’ve been playing out in his book have been of a different sort than fans might be used to. I don’t think they fit with Rodgers really, since he’s a super-soldier and is capable of taking on superhuman threats though, so the split makes good sense.

Although I’m sure there will be a point where we see only Steve standing as Cap, right now this dual format should be a fun one. And it should make for some fun team-ups as well.

Look for Captain America: Steve Rodgers to join Captain America: Sam Wilson on the racks with its first issue this Spring, from the creative team of Nick Spencer and Jesus Saiz. And while you’re waiting for the debut, you can have a peek at Steve in his all-new costume (and wielding that retro-shield) in the gallery below.

Jason's been knee deep in videogames since he was but a lad. Cutting his teeth on the pixely glory that was the Atari 2600, he's been hack'n'slashing and shoot'em'uping ever since. Mainly an FPS and action guy, Jason enjoys the occasional well crafted title from every genre.
@jason_tas
Previous EA Update: Loads more content on the way for Star Wars: Battlefront
Next Activision takes you back to WWII in first Black Ops 3 ‘zombies’ trailer