One of the biggest games of the year doesn’t disappoint with multiplayer action aplenty and cool, cyber-powered abilities. 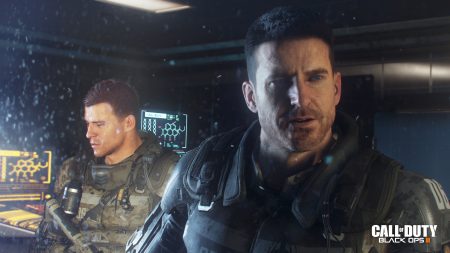 Call of Duty and I have kind of a strange past. For starters, I’m a huge fan of FPS’, I don’t think you’d have any question of that if you’re a regular reader here at BG. As such, I pretty much dig the CoD franchise on the whole, though that hasn’t always been the case.

I flat-out loved the games that started off the series, and were set in World War II. I loved the first two Modern Warfare games as well, though I kind of fell out of love with the whole ‘military shooter’ thing after that. It got to be a yearly occurrence that I’d read (and report on) the announcement of a new Call of Duty, then be completely non-interested right up to the release.

There were a few pleasant surprises in there, don’t get me wrong, though I just had no excitement for the games that had started carrying the Call of Duty name. This year was different though. This year I actually got pretty pumped for what Activision and developer Treyarch were cooking up. One of the main reasons for that, was that, although I didn’t play the second game in the sub-series,  I liked the original Black Ops a lot. And quite frankly the prospect of another entry, and one that had a super-hi-tech setting, got me very interested.

For the most part, the excitement was well-warranted, though I did have some issues with this one here and there, mainly focused around the campaign. Since that’s probably the weakest part of the trio of experiences that are included in the box with Black Ops III, we’ll get that out of the way first.

Set in the not-terribly-distant future, Black Ops III has little to no connection with the original game in the series or BlOpsII that I can tell. I’m aware of the basic story behind that second game, even though I didn’t play it, and it seems as though there isn’t much that connects the two games other than the fact that they take place in the sane fictional universe.

You’ll start things off by creating a character, which could be male or female in a nice twist, and comes with a decent amount of facial options. And although there’s a limited number at the start, as you play you’ll unlock other outfits, plenty of weapon options, and even new cyber-core abilities. That last element allows you to pull off some impressive ‘super-powered’ attacks, of both the passive and active varieties, as you upgrade your tech trees (there’s three) during the campaign. Among other things, you can engage active camo, fire out a disruptive swarm of nano-drones, and blast robot foes with a crushing melee attack; a lot of what you can do actually reminded me a fair deal of BioShock. That’s a good thing.

Oh by the way, there might be limited creation options as to who you play as, but don’t think that you’ll be stuck with a ‘silent protagonist’. There’s plenty of involvement for your character in the story and there are gorgeously animated cut scenes all over the place, complete with extensive scripting and voice work.

Things in Black Ops III boil down to the fact that you’re a part of a highly trained and cybernetically-enhanced US military squad. And though you’re new to the team, with a little time your character quickly becomes a solid part of things. Together with your partner Hendricks, it’s up to you to get to the bottom of a conspiracy that stretches the globe and has given birth to an all-together new threat. I don’t want to spoil everything for you, but there’s a plot device that takes hold in the game via the cybernetic theme, and becomes the main opposition to your character and his/her allies. And that’s kind of what I had an issue with.

It’s not that it was handled badly really, but I felt that there was a lot more that could have been done with the big turning point of the story. It just should have had more of an impact than it did I think. It was kind of hollow and left me wanting more of an explanation, more of a lasting-effect, and just… more. That’s a shame since there’s a lot of really cool ideas in here, but I felt like the story never got off the ground and stayed airborne for all that long. It was enough to keep me playing, ,but only for the excellent gunplay.

I also thought the script was really lacking. Although the voice actors did a solid job for the most part, many of the exchanges in the game didn’t live up to what I’ve come to expect from most of the big budget blockbuster games these days. Now I know you’re probably saying that Call of Duty isn’t exactly known for the scripts and acting, but I’ve liked a lot of what they’ve done over the years and this is an exception in that regard.

While there may be a bit of a shortcoming in that department though, I do have to add that the music is fantastic throughout, as are the sound effects. And the graphics? Phenomenal. The game looks like a billion bucks, and features varied locations to fight in, including some really cool, high-tech bases that are quite imaginative.

Speaking of ‘imaginative’, some of the levels have incredible gimmicks to them that shake things up nicely and make playing through the campaign tons of fun. I’m not going to ruin the surprises any here, but there’s some super-cool stuff lurking around in Black Ops III’s single player campaign. Not that you have to play by yourself though, as your campaign can be joined by up to three friends online for a four-player squad.

And of course, then there’s the multiplayer.

I’m not all that big of a multiplayer fan, but CoD multi has a flavor that millions of gamers find irresistible, and you’ll be happy to know that this version of what the series offers is every bit as enjoyable as it’s been in the past. Most of what’s here is going to be familiar to you if you’re a fan of the series, although there are new elements as well.

The Pick 10 system allows gamers to grab a set of ten attachments for their weaponry, perks, etc, and then take that gear into combat. That’s it though, since just like in the campaign, you use the gear that you choose and won’t be grabbing stuff off of dead foes. Still, characters are very different from one another, thanks to the fact that you’re no longer just picking a blank slate of a soldier to fight as.

Also as in the campaign, Black Ops III tasks players to actually choose a sort-of character for the multiplayer. These aren’t characters in the traditional sense, as they don’t really have personalities or dossiers that you can read or anything, but each one does specialize in a specific combat-style with specific perks. It might sound simple at first, but this really nicely alters the strategy that you have to take in matches. Some specialists can do certain things, and some can’t, and if you’re proficient with one you can really turn the tide in a match.

And speaking of multiplayer, I’d be remiss if I didn’t talk about the Zombies mode.

I think it’s safe (arguable, but safe) to say that Call of Duty Zombies has become bigger than the featured campaign and almost as big as the standard multiplayer. The casts that Activision seems to be able to assemble for these things is staggering too, and this time around includes Jeff Goldblum, Heather Graham and others.

The story is way deeper than in the past too, though this version of zombies plays more or less the same as what you’re used to. There is one major gameplay innovation though, in that you can morph into a Cthulhu-like horror at times. Using this little trick, you can go on a time-limited undead-slaughtering rampage. As I mentioned though, the rest of the gameplay is the same as always; you have to repel waves of zombies and rebuild blockades when they’re overrun.

I wasn’t as crazy about the story in Call of Duty: Black Ops III as I have been about some past games in the series. That said though, I’m probably in the minority in that it actually counted as a strike against the game. Most gamers, I’d say the vast majority, enjoy CoD (in all its forms) for the multiplayer and the zombies at this point, and in both those cases Black Ops III shines.

The multiplayer once again builds on what’s become some of the best in the biz, and the zombies mode continues the red of being bigger and more in-depth with every incarnation. Add to that the fact that the single-player campaign has some wickedly cool moments and a decent enough narrative to keep you playing, and you’ve got another winner of a game.

Jason's been knee deep in videogames since he was but a lad. Cutting his teeth on the pixely glory that was the Atari 2600, he's been hack'n'slashing and shoot'em'uping ever since. Mainly an FPS and action guy, Jason enjoys the occasional well crafted title from every genre.
@jason_tas
Previous Game Modes get highlighted in new Mighty No.9 trailer
Next Brutal Gamer’s Holiday Season Gift Guide – 2015 edition