A tricky name for a wonderful remaster.

Darksiders 2: was an amazing game. So much so, that it invited a HD remaster for the latest generation consoles. Deathinitive edition is a worthwhile remaster. Included were the numerous DLC packs made available for the game, such as additional missions and armors. With a combination of RPG gameplay, puzzle-solving elements, button-mashing action and a unique storyline, there is something for everyone. We reviewed the original release here. Let’s see how the remaster stands up.

While Darksiders saw War attacking mankind and bringing about the end of days, Darksiders II: Deathinitive Edition brings us the story of War’s brother Death. War has been brought before the Charred Council to pay for his crimes. Now Death rides forth, with the daunting task to clear his brother’s name, which will not be an easy. Death believes that War has been set up for this fall, and aims to prove this to the Council. In this 20+ hour adventure, follow Death as he travels multiple planes in search of answers. 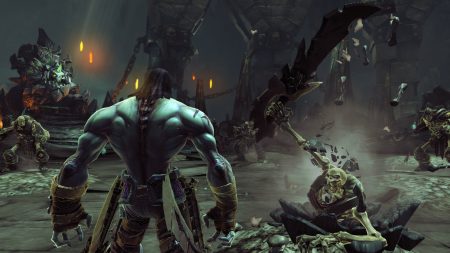 Death travels to the Forge Lands, a land of giants or Makers, as they are known here. These Makers predate Heaven and Hell, are neutral, but aid in the creation of the cities, weapons and even worlds. Once he learns a bit more about the Corruption and why it is hindering things, he continues his travels. Death travels to the Land of the Dead (Purgatory), the Abyss (Hell) and the White City (Heaven) in search of answers, and following the Corruption.

The maps for Darksiders II: Deathinitive Edition are huge, and there are several. The gang over at Nordic Games have meticulously gone through and updated this game for their remaster. The level of detail is increased, the lighting is both more subtle and more intense, depending on the location and use.  The final product may go unnoticed by some, but the fact remains: Nordic  has spent long hours dedicated to making this title amazing. They did not disappoint. 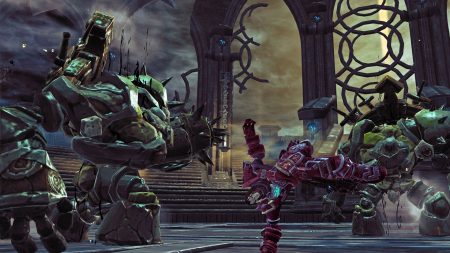 The game retains the graphical style of its predecessor and its original. However, Gunfire Games, most of which worked for the original developer Vigil Games, have gone in and reworked the game on a massive scale: completely re-lighting scenes, upgrading visual models, adjusted the loot distribution mechanism and made the game to run at 1080p natively.   The worlds are enormous, and give you plenty of room to roam and kill  enemies. The downfall to this can be that your game can feel a bit tedious at times. Jump on your horse Despair and ride across the great expanses between goals, occasionally stopping to seek out a random chest. The ability to fast travel once you’ve reached checkpoints helps here, though sometimes you find yourself wishing for more.

Jesper Kyd’s score for Darksiders II: Deathfinitive Edition is nothing short of beautiful. From ethereal sounds of harps to the driving sounds of the middle-east, your ears will be treated to delicacies as you go. I found the soundtrack good enough to use it as background music while I work at my desk.

As with many games of this scale, there is always something you have probably overlooked. I am already looking back at chests I could not reach, realizing there are quests I completely forgot about. Tracking down 35 pieces of special stones, 10 pages from a long-lost book, or even artifacts from lost civilizations. And then there is the arena in the Crucible. Who doesn’t love a good onslaught of enemies from time to time? I know that would be an entertaining way to spend an afternoon for me. 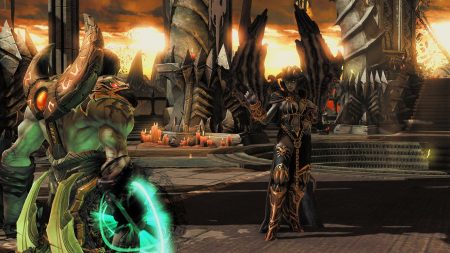 This game was a wild ride. Saying that the game was beautiful just doesn’t do it justice. The fact that the team at Gunfire Games spent two years with this title, they went back and really gave Darksiders II a serious level of attention. I felt that the controls were spot on. The camera was a little ‘too much’ for me, personally. I found myself getting uncomfortable after long sessions, but this could not deter me from venturing on. I wanted to continue, and see what trouble Death was going to get himself into next. The sheer scale of some of the monsters in this universe, you would have to be one of the Riders of the Apocalypse to stand a chance against. But that’s what makes games like these fun. Where else are you going to stand against a 5-story stone guardian projecting explosives at you, and have any chance of surviving?

If you played Darksiders II, the DLC alone may not be enough to convince you to pick up the Deathinitive Edition. That being said, if you always meant up to pick up the second Darksiders, and just never got around to it, now would be the perfect opportunity. Grab that game you were looking forward to, and gain all the extra DLC in the process!

Darksiders II: Deathinitive Edition is available for PS4 and Xbox One. Don’t miss out, grab your copy today!

A fan of media on multiple platforms, I am always watching or playing something! Who knows what I will be on to next?
@mackeyp42
Previous The Art of Assassin’s Creed Syndicate (Book) Review
Next SteelSeries Siberia 200 (Hardware) Review