Continuing to be your source for all things Star Wars toy-related, Toys R Us has some all-new stuff hitting its shops. 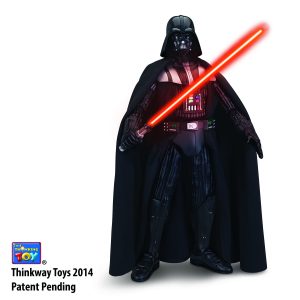 You might have seen the new commercial hitting the airwaves from TRU. You know the one, where the father and daughter bond over Star Wars. Well they’re going to have a lot more to bond over thanks to the all-new stuff that’s hitting Toys R Us’ everywhere.

The toy mega-chain is adding a plethora of new items from Thinkway Toys, including items that span characters and vehicles from the original trilogy and the new movies, kicking off with The Force Awakens this December.

And these are more than just action figures and vehicles too, Thinkway has a lineup of interactive toys in stores. They’re all pretty cool too, and not only move, but will talk back to you. Scroll on down to see the offerings, as well as a description of what they all can do.

If you’re in a playful mood right now by the way, you can log onto ToysrusEpicBattles.com and play a few rounds of The Epic Battles. Featuring “hand-drawn designs by Jeff Carlisle”, The Epic Battles allows fans to do a little hunting for hidden objects in exchange for certificates of completion. It’s not all that in-depth, but it is a fun way to pass a few minutes. And hey, you get a nice certificate that you can trade in at TRU stores as a bonus.

Jason's been knee deep in videogames since he was but a lad. Cutting his teeth on the pixely glory that was the Atari 2600, he's been hack'n'slashing and shoot'em'uping ever since. Mainly an FPS and action guy, Jason enjoys the occasional well crafted title from every genre.
@jason_tas
Previous Image offers up new teaser for Wytches
Next Harrow County #7 (Comics) Review