The original Ghostbusters get an all-encompasing guide from Insight Editions. 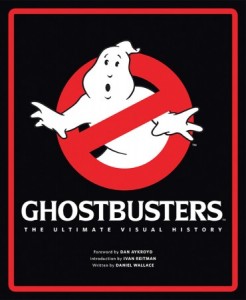 Well, to put this simply and plainly, if you’re a fan of the original Ghostbusters films then you should probably get this book. Since we tend to make our reviews a little more in-depth than that though, let’s dig in a bit shall we?

I’ve been a fan of the boys in gray since the first film debuted way back in 1984. And by ‘fan’, I mean I was obsessed with Ghostbusters. I’m sure more than a few people out there reading this can sympathize with me, but I ate up both movies, the cartoon show, the comic books, and the toys like nobody’s business.

I proudly wore the role-playing proton pack toy, wielded the little plastic PKE meter, and had plentiful imaginary adventures in ghost-busting with my friends, who were all into the property as much as I was. In fact, I liked Ghostbusters so much that it even spurred me into what’s been a pretty much lifelong interest in the supernatural.

That’s a story for another time though, as we’re talking about a specific item in this review, and as I inferred, it’s a very worthy addition to any fan’s bookshelf. And that’s because the book, emerging from the mind of writer Daniel Wallace, is about as complete a look at Peter, Ray, Winston, and Egon as anything I’ve ever read.

Running 223 pages and split between 33 chapters in three different sections, this is a meaty tome. You can tell that Wallace is a fan himself; it comes through in a big way in not only how in-depth the book gets, but also the zeal with which the writer tells the story behind the movies and more.

Part one focuses on the original film, and this isn’t just the story featured in the movie, or even the process that went into its special effects. Wallace gets into everything about the making of what would become a classic and a part of the world-at-large’s pop culture mythos. You’ll find Dan Ackroyd’s very first ideas and thoughts that would be fleshed out into what you eventually saw on screen in here.

There are notes and drawings galore too, so it’s not all text-based history either. Some of the extras included are things like the extremely different first logo, and even an insert with drawings and scene layouts for the initial scene with onionhead, I mean Slimer.

In a few ways, the book is actually more like a ‘vault’. If you don’t know what that is, it’s a style of volume that was pretty popular a few years back and runs heavy on extra inclusions, pretty much like the ones I mentioned above. So with all the added stuff, you can see how there’s a definite ‘vault’ feel to things in this particular book.

Still though, even with all that, the meat and potatoes is still the story behind the movies. And there’s plenty here that will inform even the biggest die-hard of followers. In part 2 of the book for instance, there’s mention of Bill Murray’s (Peter Venkman) attitude on the movie after it was released.

I had long known, as I’m sure most fans have, that Murray was cool on the idea of coming back for another round, even with the first movie being as popular as it was. Obviously he did agree to come back, though it was apparently still in his consciousness that he didn’t really want to be in it.

Totally unknown to me (especially as a kid at the time), was that Murray sort of beat up on the sequel publicly. He vocally mentioned how there were too many special effects in it for instance, a statement that director Ivan Reitman takes issue with since there were actually fewer effects shots in Ghostbusters II than were in Ghostbusters. That’s the kind of info that you’ll find in here, and it’s all great. Even if you know about some of it, it’s awesome to see it all in one place, complete with all those great illustrations and extra bits.

As for part three of the volume, well, I think that’s probably the most fun out of all of it. The third section is about the ‘expanded’ GHU. It covers the original cartoon, the Extreme Ghostbusters, Ghostbusters: The Video Game (which is still as close to a third adventure starring the original crew as we’re likely to see), the comic books and more. Lots more. There’s even quite a bit about those toys that I was talking about at the top of this review; lots of great memories.

I pretty much gave you the ‘final thoughts’ for this book already, but here we are in the official section for it, so I’ll repeat my sentiment: Ghostbusters: The Ultimate Visual History is as close to a ‘must buy’ as you can get.

The imagery is awesome and includes stuff from the feature films, the cartoons, the games, the toys, and just about everything else. And right on top of all that are some of the deepest looks at the franchise that you’re going to find anyplace. You’re just flat-out not going to find anything this complete in another book out there.

Ghostbusters: The Ultimate Visual History is pure gold if you’re a fan of these kinds of books, or the Ghostbusters in general. I seriously doubt you’ll be disappointed.

Jason's been knee deep in videogames since he was but a lad. Cutting his teeth on the pixely glory that was the Atari 2600, he's been hack'n'slashing and shoot'em'uping ever since. Mainly an FPS and action guy, Jason enjoys the occasional well crafted title from every genre.
@jason_tas
Previous 10 questions with Alise Gluskova, artist of Dark Horse Comics’ Abe Sapien
Next Image offers up new teaser for Wytches