Arkham Knight patch appears for PC and vanishes like the Batman

Those waiting patiently (very patiently) for the fabled patch for the PC version of Batman: Arkham Knight might be on the verge of getting their games fixed. 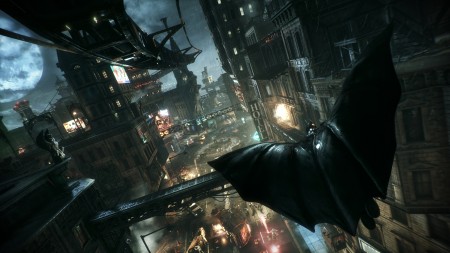 Everyone knows the story by now; the PC edition of Batman: Arkham Knight was massively borked when it arrived on the platform this past Summer. The game was subsequently pulled from Steam and other retailers and the promise was made that a patch that would fix everything wrong was on the way.

Several reassurances that it was still coming later, and we finally got it… for a while. Apparently, some gamers were fooling around with the settings on the game’s Steam listing (imagine that) and somehow enabled beta mode. This allowed for the download of a previously unavailable patch that actually did take care of a bunch of issues.

Gaming site Kotaku reports that gamers had a much better time of playing, and experienced vastly improved frame rates (50 to 60+) and brand new graphics options. Sadly, another patch was issued that cancelled everything out (though some can still play for some reason), but this is a terrific sign that Warner Bros and Rocksteady are still very hard at work on the title, and look to be getting it right. Finally.

Jason's been knee deep in videogames since he was but a lad. Cutting his teeth on the pixely glory that was the Atari 2600, he's been hack'n'slashing and shoot'em'uping ever since. Mainly an FPS and action guy, Jason enjoys the occasional well crafted title from every genre.
@jason_tas
Previous Uncharted 4’s special editions outlined
Next XCOM: Enemy Unknown might be heading to the PS Vita