Marvel’s latest Iron Man title is the centerpiece of the All-New, All-Different Marvel Universe. And while it’s definitely got some ‘new and different’ in it, it’s also got a familiar title. 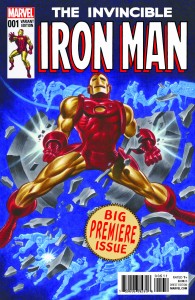 This Fall, the Marvel Universe is reforged and recharged as All-New, All-Different Marvel kicks off in full force! New titles, new characters, and new creators explode on to the scene as only Marvel could bring you. Leading the charge for this movement is the blockbuster new title INVINCIBLE IRON MAN #1 – from the explosive creative team of Brian Michael Bendis and David Marquez! Today, Marvel is pleased to present your new look at the highly anticipated first issue coming to comic shops on October 7th!

Exploding out of the pages of Secret Wars comes a fresh new take on the Armored Avenger in a gigantic new series! New armor, new villains, a new supporting cast and a new purpose as Tony Stark bursts across the landscape of the Marvel Universe. And a shocker of a last page that will have the entire comic industry talking! Plus, questions will be answered – what really happened at the end of Secret Wars #8? Who are Tony Stark’s biological parents? The quest begins here!

Strap in and suit up, True Believer. The marquee comic launch of the fall is coming as Bendis and Marquez armor up to bring you a new Iron Man for a new Marvel Universe. Don’t miss the blockbuster INVINCIBLE IRON MAN #1 – on sale October 7th!

Number 1’s have become something of an addiction for comics publishers in the last 2 decades or so, with plenty of revamps and relaunches hitting shops form the big two. This one though, is definitely one to keep your eye on.

Not only is this a return to the familiar Iron Man form (complete with cherry-red colors) that was sorely missing thanks the ‘inverted’ version of Tony Stark that we saw before Secret Wars set in, but we also get a return to the Invincible Iron Man name for the book.

I know, I know; the original is The Invincible Iron Man, and this is just Invincible Iron Man (that’s a retro-inspired cover used above), but it’s so close that the difference is negligible. It’s just so good to see a classic title being used once again, that’s right in line with Amazing Spider-Man, etc. There’s no ‘New’, no ‘All-New’, no ‘Superior’, nothing like that, and as a long-time Marvel fan- I love it.

Invincible Iron Man #1 hits stands on October 7th, and will be stacked with a series of (quite frankly) awesome variant covers. Check ’em all out in the gallery below.

Jason's been knee deep in videogames since he was but a lad. Cutting his teeth on the pixely glory that was the Atari 2600, he's been hack'n'slashing and shoot'em'uping ever since. Mainly an FPS and action guy, Jason enjoys the occasional well crafted title from every genre.
@jason_tas
Previous Resident Evil 2 remake confirmed by Capcom
Next US Xbox One sales rise 44% in July