3D Streets of Rage 2 joins the Sega lineup on 3DS

One of the best Genesis beat’em ups of all time is back and in 3D on the Nintendo 3DS. 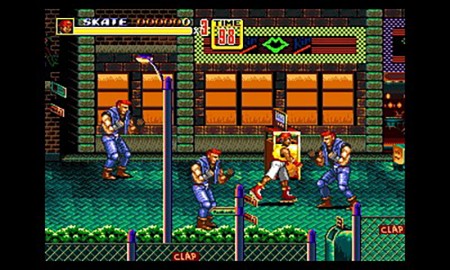 First- I love Streets of Rage. I played the heck out of all of them on the Genesis back in the 90s and am absolutely stoked to see SoR2 getting the 3D treatment on the 3DS. And while I was so-so on the whole handheld 3D gimmick in the past, the New 3DS has changed that feeling sine, you know, the 3D actually works now.

There’s more than just the 3D implementation too in this version. A new Casual Mode makes the game a breeze and has baddies put down with just one knockdown and there’s also a Fists of Death Mode, which is a one-hit kill affair. You’ll have to beat the game to unlock that one, but it should definitely add in a fair bit of replayability.

In addition, Sega has built-in some emulation options, which includes the Japanese version of the game, some extra display options, and more.

3D Streets of Rage 2 is available now on the 3DS eShop.

Jason's been knee deep in videogames since he was but a lad. Cutting his teeth on the pixely glory that was the Atari 2600, he's been hack'n'slashing and shoot'em'uping ever since. Mainly an FPS and action guy, Jason enjoys the occasional well crafted title from every genre.
@jason_tas
Previous Dead Drop #3 (Comics) Review
Next Star Wars heads in a new direction with a new artist in issue #8