Coming this Fall, the All-New, All-Different Avengers are not all together unfamiliar, but definitely represent a new direction for the team. 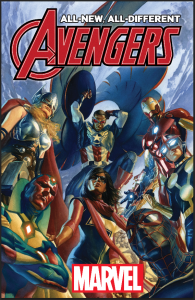 Kicking off the new series, writer Mark Waid plans no training period and a baptismal by chaos and WAR! “As faithful NOVA readers will recognize, the main villain in our first story – Warbringer – has strong ties to Sam Alexander [a.k.a. Nova], but does Sam dare confess this to the team after the havoc Warbringer wreaks in New York City?”

Waid also plans to place hurdle after hurdle in front of this new team including a challenge a majority of people have to deal with every day – financial responsibility. “One of the Avengers’ often-undiscussed ‘superpowers’ has always been Tony Stark’s boundless fortune. As readers of Brian Bendis’s upcoming INVINCIBLE IRON MAN will see, Tony can no longer be the team’s sole financial resource–meaning that our Avengers will have to operate a little more modestly and with limits to their resources, making their battles even more challenging.”

The Avengers assemble this fall for a team that will truly live up to the name the series title implicitly states that is all-new, all-different, and like no other Avengers team ever. “This team is a group of characters that you’ve never seen operate together before, no matter how long you may have been reading comics, and yet it’s also a team that upholds the Avengers’ traditions—there’s nobody among these characters that you look at and feel hasn’t earned their place on the team or in the spotlight, the way some past Avengers occasionally have,” says Marvel Executive Editor Tom Brevoort.  “And it’s possibly the most real-world reflective Avengers team of all time, with only a single white male to be found amidst the membership rolls.”

The Avengers assemble this fall as the Marvel’s mightiest take on all-new foes, all-new challenges and present an all-new team in ALL-NEW ALL-DIFFERENT AVENGERS#1!

So it is Stark in that Iron Man armor after all… If you recall, not too long ago there was a ton and a half of speculation that someone else was set to take over the Tony after Secret Wars. I had even heard that he was to be an Avenger that you already know from the team. And since it’s still Stark, I guess that’s technically true.

Joining him are the Avengers that you probably more or less know, including Vision, Captain America (Sam Wilson), and Thor (Jane Foster). It’s those new Avengers though, that really shake things up for the squad. Nova, Spider-Man (or whatever Miles will be called now), and the current Ms.Marvel are all definitely new, and very young. That brings up a kind of senior/junior dynamic that the Avengers really haven’t had int he past at any time.

I also have to wonder what happens to some f the more well-worn members of the team like Black Widow and Hawkeye. Do they go solo? Do they join up with a different team (Steve Rogers’ perhaps)? We’ll find out all that and plenty more when All-New, All-Different Avengers #1 arrives on the stands this coming October.

Jason's been knee deep in videogames since he was but a lad. Cutting his teeth on the pixely glory that was the Atari 2600, he's been hack'n'slashing and shoot'em'uping ever since. Mainly an FPS and action guy, Jason enjoys the occasional well crafted title from every genre.
@jason_tas
Previous The Cyber Core, co-op gameplay and more in this new Black Ops III trailer
Next EA may delay Battlefront if it’s not “right”