As usual, Diamond Select Toys has a nice cross-section of stuff coming up for release at comics and specialty stores. 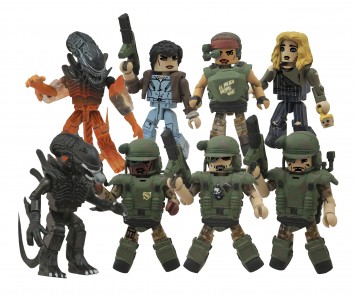 Hitting this coming Fall to be specific, pretty much all of this stuff is worth a look, depending on your fan level of course. For me, those new Aliens Minimates might be a little too tough to overcome. Likewise, that Savage Hulk is pure awesome. If you’ve read through any of our Diamond coverage in the past I’m sure you’ve seen my praise-heaping when it comes to the company’s jumbo-sized figures like Abomination and Juggernaut.

I make it a habit to buy every single one that they release. It’s not that the regular-sized Marvel Select figures aren’t cool and all, but the larger scaled characters are just so great that it’s hard to not pick them up. And Savage Hulk falls right into that. Of course, it doesn’t hurt that this is also my favorite version of the character, but I digress.

Anyway, it’s a great assortment of stuff, and we’ve got the full list below. Everything that you see here should be on store shelves some time this Fall too, so make your plans accordingly.

Jason's been knee deep in videogames since he was but a lad. Cutting his teeth on the pixely glory that was the Atari 2600, he's been hack'n'slashing and shoot'em'uping ever since. Mainly an FPS and action guy, Jason enjoys the occasional well crafted title from every genre.
@jason_tas
Previous Crisis in Infinite Crisis as WB pulls the plug on the MOBA
Next NECAs 4th wave of Alien figures is looking just about perfect