It’s official, Ninjak is a hit for Valiant Comics. 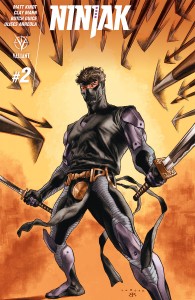 If you read BG’s comic coverage regularly, then you already know that Ninjak is off to a great start and is one of the best new books on the racks this year. Centering on British operative Colin King in both his modern guise of super-ninja Ninjak and his first missions as a raw recruit, this book has a little something for everyone, and promise of plenty more to come.

I loved it, and apparently I’m not alone. The first issue has officially sold out at retail and will be getting a second run that’s currently slated to appear on store shelves the same day as the second issue of the run. Also clocking in at 40 pages, this issue will follow the split narrative of the first (a present and a past story backing it up) and will also be presented by the team of Matt Kindt and Clay Mann on the main story, and Kindt and Butch Guice on the second.

Expect the pair of issues to show up on April 22nd, and for a sneak peek at Ninjak #2, check out the gallery below.

Jason's been knee deep in videogames since he was but a lad. Cutting his teeth on the pixely glory that was the Atari 2600, he's been hack'n'slashing and shoot'em'uping ever since. Mainly an FPS and action guy, Jason enjoys the occasional well crafted title from every genre.
@jason_tas
Previous White Night (Xbox One) Review
Next Star Wars Battlefront to debut at next month’s Celebration