DC Comics’ Harley Quinn gets a Holiday Special issue this week, the Turtles take on the Technodrome, and The Valiant and Spider-Man and the X-Men kick off their runs. 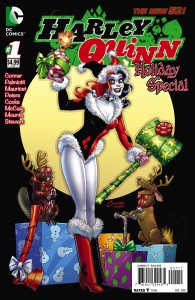 Becoming an even hotter character with fans in the wake of the Suicide Squad movie announcement (where she’ll be played by Margot Robbie), Harley Quinn has her all-new Harley Quinn Holiday Special #1 on the racks this week. The issue collects a bunch of shorts featuring Harl and her “her special brand of holiday cheer”, which should be a fun time, and just before the Holiday Season really kicks off too.

Also new this week, the new Spidey ongoing Spider-Man and the X-Men brings the webbed-wonder to the X-Mansion school as he sort-of goes undercover for the late Wolverine. Seems that Wolvie asked Pete to keep his eye on the kids at the school as he had a bad feeling something was very wrong there, and if something’s amiss, Spidey is the man to find it. Or it’ll find him. One way or the other.

The Valiant also starts this week. Valiant Comics’ new mini-series promises one of the biggest stories yet to hit the relatively young universe. Starring a bunch of the publisher’s biggest heroes, The Valiant brings about an ancient evil that’s set on returning the globe to a dark age of sorts. If you’re a Valiant follower, then you’re not going to want to miss this one, check out our review here.

Finally this week, don’t miss Teenage Mutant Ninja Turtles #41- especially if you’re a fan of the original cartoon/Archie Comics series from the ’90s. Simply put, the Turtles take on the Technodrome and Krang as he enters ingot he last stages of hies plan to terraform the Earth and wipe out the human race. This is a big new arc for the series with some of the biggest characters in TMNT lore, don’t miss it.

As for the rest of my picks for this week, have a look at the list below and then click on over to the full listing of what’s on the way for this Wednesday on Previews site here.

Jason's been knee deep in videogames since he was but a lad. Cutting his teeth on the pixely glory that was the Atari 2600, he's been hack'n'slashing and shoot'em'uping ever since. Mainly an FPS and action guy, Jason enjoys the occasional well crafted title from every genre.
@jason_tas
Previous Retrobooster (PC) Review
Next King’s Quest returns with gorgeous new trailer