Let’s all go down to Kyrat. 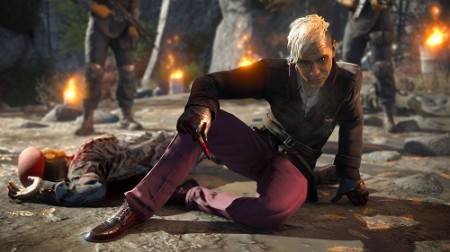 The holiday season is in full swing and new games are hitting store shelves almost every other day and Ubisoft is here to add another. Far Cry 3 was a massive success and rightfully so, it was a damn great game from start to finish and contained dozens of unique moments from start to finish and Far Cry 4 is here to build on that by setting you loose on another enormous living world .

Far Cry 4 revolves around a chap called Ajay Ghale, a young man who has returned to the fictional Himalayan region known as Kyrat to accomplish his mothers final wish and spread her ashes. Unfortunately, it doesn’t quite work out that way as the bus you’re travelling on is ambushed by Pagan Min and his goons. Min, is the bat-shit insane king of Kyrat who will literally slaughter anyone who disagrees with him but you can’t help love his eccentric personality and him constantly giving you a casual ring throughout the game just to have a chat. Similar to Far Cry 3, Ubisoft have created another evil mastermind that you’ll never forget.

Believe it or not, Kyrat isn’t the most friendly of places because of the way in which Min runs things and the local rebellion faction known as the Golden Path are here to take the country back. After some fortunate events, Ajay Ghale finds himself deep within the organization, murdering anything and everything that the leaders of the group want him too. The game makes the player pick incredibly tough choices throughout which lead to frustrating conversations afterwards; no matter what you do, someone will hate you with no room for compromise. 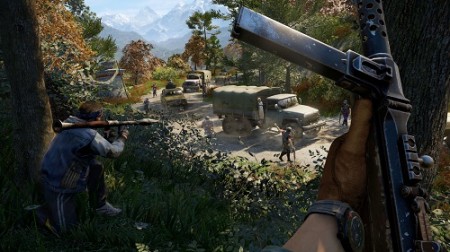 The Kyrat region itself isn’t exactly unique and is fairly similar to Far Cry 3 but that isn’t exactly a bad thing as it works incredibly well for the game. The combination of vehicles and wing suits make travelling around this mountainous region a joy; gracefully gliding over hordes of rhino’s and elephants as they surround a lake is a surreal experience, even in a video game. The most notable change from FC3 to 4 is just how gorgeous this game is and it’s definitely the first game this generation of consoles shows what they’re capable of.

If you’re looking for a game to sink a few dozen hours into, Far Cry 4 is the game for you. Kyrat is jam-packed with content from start to finish. The story alone will take a good 10-15 hours if you’re able to power through but it’s so tough not to get distracted by hunting animals, climbing bell towers, liberating outposts or by completing optional side missions such as racing, bomb defusing or convoy escorting. There is just so many things to do and it’s all pretty damn enjoyable and if you want to max out your skill tree, you better get finishing these missions as the skills you unlock are pretty damn useful.

Once you start reaching the end game content, the outposts just aren’t a challenge anymore but this is where the fortresses come into play; think of these as mega-outposts. They contain dozens of enemies scattered around a well fortified set of buildings and it’s your task to beat them, the reinforcements and claim it as your own. It may not sound tough but the army of grunts combined with constant mortar fire, blood thirsty guard dogs and of course, heavily armoured gunships certainly ramp up the difficulty. 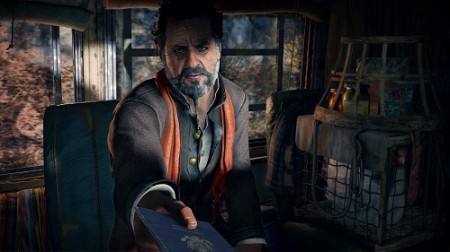 Far Cry 4 continues the series legacy of having a range of different skills that can be upgraded at any time, it’s just a matter of whether you’ve killed enough animals or gained enough experience. As you kill animals around the world, you’re able to take their skin and craft it into a certain upgrade such as a larger loot bag or ammo capacity. All incredibly useful and the last stage of these upgrades require you to hunt an incredibly rare animal which can only be found in certain Kyrat fashion week quests. If you think you’re a skilled enough hunter, you can instead use the bow to gain two of any skin and I would highly recommend not trying to kill a rhino with this, it will not end well for you, I found that out first hand.

The skill tree that you’ll gradually progress through is fairly simple but is well worth investing time into as it contains numerous extremely useful skills such as less damage from fire or more effective syringes which can be crafted by collecting herbs. All you need to do is earn experience from completing missions and killing enemies, eventually levelling up and it’ll reward you with a skill point that can be spent however you feel like spending it.

One of the most enjoyable features of Far Cry 4 is just how you’re able to pick and choose how you complete missions; fancy going balls to the wall and blowing up everything in your path or super sneakily, strategically eliminating the enemy captain? The weapon arsenal available the player helps you do exactly that; grenade launchers, light machine guns, hunting bows, sniper rifles, it’s all there. As you progress, you’ll unlock new weapons constantly (both for free and paid) which can be customized to how you want to play; extended magazines, night vision or even silencers. 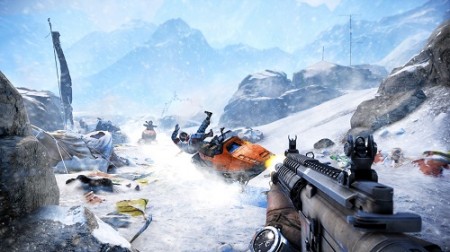 A nice new addition to the Far Cry series is the drop in-drop out co-op play which works fairly seamlessly, as long as you don’t get to far from your co-op partner. You’re able to hunt animals, liberate outposts and tackle the tougher fortresses with a friend whenever you feel like it. It’s a great idea to bring in a friend and experience it together but the lack of co-op specific missions is fairly disappointing.

As well as the open world co-op, Far Cry 4 also features a competitive multiplayer game mode that can be accessed from the right side of the home screen. It’s fairly enjoyable but is nothing more than your run of the mill shoot every opposing player in the face until your team wins. The map editor has also made a return but in a significantly worse form, it can only be used in single player and does nothing more than let player create custom outposts, making it pretty much irrelevant. This change makes very little sense, especially as the map editor was a fantastic feature in the previous titles.

Final Thoughts
Far Cry 4 is a damn fantastic game throughout and easily one of the best games to hit the next generation platforms this year. It does have its fair share of odd design choices and glitchy gameplay mechanics but it’s still enjoyable to play and its living, breathing world creates some truly unique moments, everyone will have experienced something different

Mike is Brutal Gamer's Indie Editor. He has been playing video games since the early 90s and is fond of racing games, puzzlers and MMOs. Typing /played while in WoW makes him cry, but not enough to stop him playing some more.
@Ognawk
Previous Serenity: Leaves on the Wind hits number one on NYT list
Next Geometry Wars 3: Dimensions (PC) Review