The Pokemon Lucario is the first Nintendo Amiibo exclusive to Toys R Us stores. 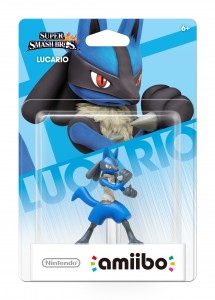 First appearing in Pokemon Diamond and Pearl, as well as making appearances in Black and White, and X and Y, Lucario has become a fan favorite character in the long running series from Nintendo. Now he’s a fighter in Super Smash Bros as well and set to make an impact in the Wii U version of the game that hits retail today.

Hi Amiibo looks pretty darn cool too, as the little guy is cast in a fighting stance, ready to lay the smack down on the Nintendo character of your choice. He’s available right now to pre-order on Toys R Us’ website and will be in-stores early next year, on February 1st, 2015.

Jason's been knee deep in videogames since he was but a lad. Cutting his teeth on the pixely glory that was the Atari 2600, he's been hack'n'slashing and shoot'em'uping ever since. Mainly an FPS and action guy, Jason enjoys the occasional well crafted title from every genre.
@jason_tas
Previous Sunset Overdrive free for 24 hours
Next Sierra adds some bonus content to Geometry Wars 3