Smashing into the Wii U just before the Holiday rush…

One of Nintendo’s biggest titles for this coming Holiday Season has also been one of its most enigmatic. Although there’s been plenty of talk about it and a ton of fighters revealed, Super Smash Bros on the Wii U hasn’t even had so much as a release date till now. That’s a fact that Nintendo has finally rectified though and, as of right this very minute, the game in scheduled to hit the eShop and retailers on November 21st in the US and on December 5th in the UK.

Also arriving at retail on the 21st of November (and on the 28th in the UK) will be the Amiibo line of interactive figurines from Nintendo. The toy series, which has as yet unknown functionality with a planned series of games on both the Wii U and (eventually) the 3DS will launch with an opening series that’s set to include a pile of the biggest stars from Nintendo’s first-party franchises. Expect to see the likes of Samus Aran, Donkey Kong,  Link, Kirby, and of course Mario out and on the racks at your local gaming destination.

A second series is also already on the books too, and will be arriving on December 19th in the UK. That series will include the likes of Princess Zelda, Diddy Kong, the other Mario Bro (Luigi), Little Mac, Pit and Captain Falcon of F-Zero fame. There’s no date yet for these in the US, but you can figure sometime around that same UK launch date to be safe. 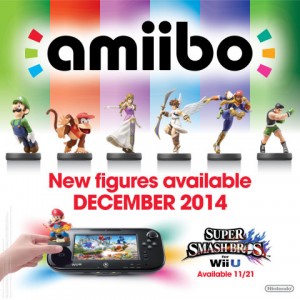 It’s going to be a very big Holiday Season for the Nintendo faithful.

Jason's been knee deep in videogames since he was but a lad. Cutting his teeth on the pixely glory that was the Atari 2600, he's been hack'n'slashing and shoot'em'uping ever since. Mainly an FPS and action guy, Jason enjoys the occasional well crafted title from every genre.
@jason_tas
Previous The Evil Within has horror, horror, and more horror… and gore
Next Cheap zombies are marching on comiXology as The Walking Dead is on sale