T-Bone out for “Bad Blood” in new Watch_Dogs DLC

Ubisoft has announced new DLC for Watch_Dogs, titled “Bad Blood.” In this DLC, players will take the role of T-Bone, one of the few of Aiden’s friends/enemies/frienemies. The new DLC will be available for purchase on September 30 while season pass owners will get access a week earlier on September 23.

“Bad Blood” will continue with T-Bone’s story after the end of Watch_Dogs. T-Bone hacks his way through Chicago in an attempt to rescue a dear old friend. Along with a new side mission called
“Street Sweeps,” Bad Blood contains 10 new missions for T-Bone.

Street Sweep missions are another way for T-Bone to earn new gadgets and notoriety.  These Co-op missions have T-Bone and a partner cleaning up the streets of Chicago. Players will work together to eliminate gangs, blow stuff up and protect witnesses from assassination attempts. These new missions offer a new and exciting way to get back into the world of Watch_Dogs. 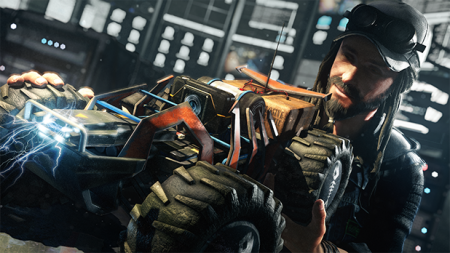 One more new element to the game is T-Bone’s new partner, Eugene. Eugene is a small remote-controlled car equipped with a bunch of fancy gadgets. T-Bone can use Eugene during missions to sneak around and distract guards. T-Bone is going to need all the armament he can get as ctOS has had a couple of upgrades as well. Security cameras have been upgraded and now come armed with machine guns.

It is nice to see such an extensive DLC package for Watch_Dogs. T-Bone is a great character and it was a natural progression that this DLC feature the hacker with a craving for explosions. This is going to be a fun addition to the already huge world of Watch_Dogs and I for one cannot wait.

As a fearful proponent, I agree with out robot overlords on House Bill 10010101 - The Full Extermination of the Human Race. But until then, make sure to check out all my writings on video game stuff.
@@docbrown303
Previous More Shulk in Famitsu scans
Next Minecraft finally has release date for PS4 and Xbox One