Crossing over into Prometheus, Aliens, and Predator; Dark Horse is about to launch its new universe of terror. 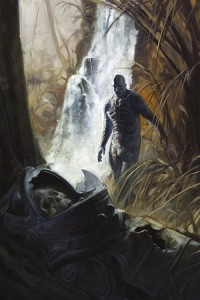 When the Prometheus never returned from her fateful journey to LV-223, the questions surrounding the origins of man went unanswered. Now a new team of explorers seeks to uncover the dark mystery that holds not only the fate of theoriginal mission, but possibly their own damnation.

On a roll as of late is Dark Horse Comics. After seeing the Star Wars license expire, the publisher has attacked all new areas of comics with their Project Black Sky superhero universe (really a first for the company) and the universe of terror that Aliens/Predator/Prometheus represents.

I’ve been a huge fan of Dark Horse’s Aliens and Predator comics for a long time, but this relaunch is something to really get excited about if you’re a fan of Fox’ shared horror-verse as well. With the way that they’re tying everything together, I even find myself looking forward to the Prometheus wing of things, a propriety that I wasn’t exactly enamored with in the theaters when the new series debuted a short time ago.

In the new book, which kicks things off for the brand, definitely has an ‘Aliens’ feel to it, though it will be focusing on the Engineers and the world seen in the flick. Actually, it ties right into the movie as the comic stars a new crew out on the hunt for the Prometheus, to find out what happened to them. Little do they know what’s in store on the planet’s surface.

Prometheus: Fire and Stone #1, from the team of Paul Tobin and Juan Ferreyra, hits the stands on September 10th. If you’re into horror and all the awesomeness that Aliens and Predator represents, don’t you dare miss it. But just in case you need a little push, click the thumb to the left to read through a special comic strip preview of issue #1.

Jason's been knee deep in videogames since he was but a lad. Cutting his teeth on the pixely glory that was the Atari 2600, he's been hack'n'slashing and shoot'em'uping ever since. Mainly an FPS and action guy, Jason enjoys the occasional well crafted title from every genre.
@jason_tas
Previous Destiny shows off multiplayer, is the most pre-ordered ‘new IP’ ever
Next LEGO Batman 3: Beyond Gotham trailer reveals army of DC Comics characters