The pic of the day evokes a feeling of nostalgia, revealing a Mario Golf alt costume and Samus’s light suit from Metroid Prime 2. 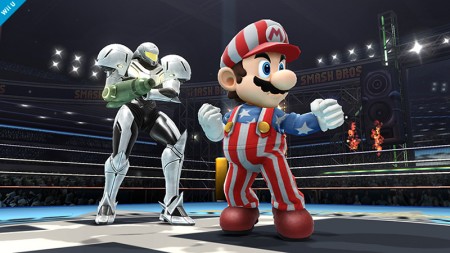 It’s obvious that Sakurai wanted this pic of the day to coincide with July 4th, the stars and stripes on Mario are a dead giveaway. That said, some of you would probably immediately think Mario Golf, rather than Independence Day, what came to my mind immediately was both. Standing beside him, Samus sports her light suit alt; if any of you have played Metroid Prime 2, then you probably know that the light suit is the final suit that you get in the game. You receive it from U-Mos when it’s time to start searching for the temple keys in Dark Aether. It allowed Samus to travel through the dark world without worrying about getting her suit damaged by the harsh atmosphere.

This is pretty good news for everyone, as it means some pretty neat alt costumes are in store for characters in Smash. We may get something cool like a Protoman alt for Megaman, a classic Sonic alt, etc. I have to give Sakurai props for giving us older fans a nod by adding this costume. He really respects the legacy behind these characters, and isn’t just adding in features from the latest games in their respective series.

Well, my name's Christopher Deleanides as you all know and I'm the Nintendo Editor here at BG. I've been playing video games since 1992, and I've been a Nintendo fan the entirety of those years. My love for video games as well as Nintendo hasn't changed, and probably never will. The only thing that comes close is politics, as I'm very deeply involved in both local and international issues.
Previous Deep Silver opens up fan vote for Dead Island 2 Collector’s Edition contents
Next Heavenly Sword movie release date revealed