One of the greatest comic book (and literary) heroes of all time takes on his parody as Conan the Barbarian draws swords against Groo the Wanderer. 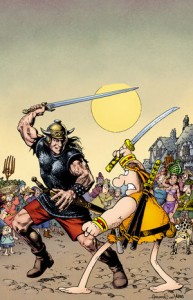 It had to happen: The most heroic warrior in history meets the stupidest as Robert E. Howard’s immortal Conan the Barbarian crosses swords with Sergio Aragonés’s Groo the Wanderer in Groo vs. Conan #1. This four-issue miniseries was concocted by Mark Evanier and Sergio Aragonés, aided by illustrator Thomas Yeates and colorist Tom Luth. Will Conan annihilate Groo? Will Groo turn out to be the man who can defeat Conan? We’ll see.

Groo vs Conan has to be one of the craziest crossovers to ever happen in comics and it’s good to see that writers Mark Evanier and Groo creator Sergio Aragonés recognize that- and are actually playing it up. Not only does the Wanderer face off against Conan in the comics realm, but in the real world as well, as the men behind the story bicker about even doing the story in the first place.

It’s a semi-fourth wall breaking tale that looks to capture both the savagery of Conan (albeit a little lighter in tone than usual) and the goofiness of Groo.  It’s really weird too to see the art styles come together and exist in the same universe. Neat, but weird.

Groo vs Conan #1 hits stores and Dark Horse Digital on July 23rd, click the thumb to the left for a full preview.

Jason's been knee deep in videogames since he was but a lad. Cutting his teeth on the pixely glory that was the Atari 2600, he's been hack'n'slashing and shoot'em'uping ever since. Mainly an FPS and action guy, Jason enjoys the occasional well crafted title from every genre.
@jason_tas
Previous The Red Solstice dawning on Steam Early Access this week
Next Destiny Beta dates and Collector’s Edition detailed UPDATE: Now with new trailer