Last week, we took a look at some of the best of all time, but we’re ending Horror Month on a high note and getting the whole team involved in a horror game roundup that you can really sink your teeth into.

Horror games are a select lot. There aren’t really that many made in general when compared to other genres out there on both consoles and PC, and games that can actually as scare the pants off a player are even fewer and further between. And I’m not talking about your typical ‘zombie shooter’ here where you mow down waves of the undead in cartoon fashion; no no- I mean really scary games. The kind that unsettle, at times sicken and disturb, and the kind that leave lasting thoughts in your head. Games where you don’t want to turn the lights off after a late night play session and random noises from the house settling give you a start just because you’re so freaked out from the game your ‘enjoying’.

Those kinds of games have die-hard fans, fans who’ll go to the mat for them and then some. Here in today’s Feature Friday we take a collective look at exactly those types of video game and let our veteran gaming crew loose to name their own greatest creep-outs. These are the kind of games that scare you so much, they become an all-time faves…

Eternal Darkness: Sanity’s Requiem was a 3rd person survival horror game, in the vain of the Resident Evil series, developed by Silicon Knights (now defunct) and released on the Nintendo GameCube in 2002. Eternal Darkness, while not a commercial success, won multiple awards, was nominated for many more, and scored top marks in review scores. The plot revolves around Alexandra Roivas, the granddaughter of Edwrd Roivas, who has been murdered. As Alexandra you’ll investigate his murder, and discoverer many of his secrets as well. You’ll also be playing as several other characters from different time periods, and explore their lives, and how the fit together with you grandfather’s murder.

One innovative aspect of Eternal Darkness was the games breaking of the fourth wall with its “Sanity Effects”. During gamplay, if your character’s sanity meter dropped too low, you would be treated with an effect ranging from skewed camera angles, whispers, cries, unsettling noises, and all the way up to insects crawling around you television screen and a false blue screen of death popping up on your GameCube. Even though Eternal Darkness sold less than half a million copies worldwide it gathered a cult following, and in 2013 a crowd funding campaign began on “Shadow of The Eternals”, a spiritual successor to Eternal Darkness developed by many of the original Silicon Knights team. With many set backs, behind the scenes drama, and the failed funding campaign the game was indefinitely delayed.

Eternal Darkness brought a great story, a vast lot of interesting characters, and some very scary innovation to a otherwise “kid friendly” system, so if you see a copy, pick it up and give it a shot.

Silent Hill 2, A game that raised the bar for horror games in general and in my opinion, the greatest survival horror title ever made. Up to this day, many games have tried and failed to reach the same heights as SH 2, but seem to misunderstand that jumpscares do not equal scary, what I liked the most about the game was the way the town itself was a manifestation of James Sunderland’s deepest darkest thoughts, fears, and insecurities.

Last I checked my favorite ‘horror’ game was Zombies Ate my Neighbors. To put it simply, it’s the classic top down shooter element of the game that makes me like it so much. I’ve never been able to beat it all the way through, sadly; the farthest I’ve gotten was level 20, and that was with a friend in co-op mode. Aside from all the humor in the game though, I always found it kind of creepy; giant babies, dolls with axes, guys with hockey masks that carry chainsaws, giant killer ants, etc. etc. I mean I know it’s kind of cheesy, but it’s good fun nonetheless.

Assuming the role of Isaac Clarke for the first time was truly one of the most nerve racking experiences in recent memories. As an engineer you were tasked with navigating the Ishimura. It was in the tight corridors that the genuine scary moments came, with every open door loomed the fear and possibility of a Necromorph appearing behind the door. Couple this with the atmospheric music and you had the genuine fear and heart racing which makes a successful horror game.

To me this echoed the feel of old classics, such as the original Resident evil and Silent Hill.

Dead Space 2 is probably my favorite modern scary game.  From the opening scenes of Isaac’s hallucinations that lead directly into all hell breaking loose, to the needle-in-the-eye mini game near the end, every muscle in my body was tense and I was on the end of my seat the entire time I had that controller in my hand. The original Half-Life was also a fantastic frightener.  Half-Life was one of the first first-person shooters to really try and immerse the player in the game.

The game’s opening interactive cinematic was brilliant and creepy.  It was the first time that, as the silent protagonist, I actually cared about the character I was playing- Gordon Freeman.  Oh and who can forget those headcrabs… eeeh.  Thinking about those dark tunnels that I knew I had to go through… knowing that one of them was probably watching me… and waiting… THEN POUNCE!!! Get ‘em off of meeeee!!!

id Software’s iconic Doom was also a good pants browning experience.  Whoever says pixilated characters cannot possibly be scary never grabbed the much-needed key to unlock a door, to immediately have the lights go out, and hear the raspy barking of a Pinkie just unleashed and  headed your way…

This is more of the entire series, but for my main example I will use…Silent Hill 2, just… wow. Few games have managed to leave me terrified, and Silent Hill 2 is one of them. First off, I love the city of Silent Hill, it’s absolutely horrifying backstory, and relations with the occult make it a less than ideal place to go looking for your dead girlfriend.

And, I know this sounds terrible, but I will be honest here; if my girlfriend went missing and the trail led me to Silent Hill, I’d find a new girlfriend for myself. The entire series manages to instil a fear into my deepest self. The demons and ghosts that haunt the town of Silent Hill still haunt my dreams years after playing.

However, from the lonely mists of the real world to the barbed gates of Hell, nothing is more terrifying that one creature…and we all know what I’m talking about…that’s right, Pyramid Head. Who could forget the first time they laid eyes upon that monstrosity? The way he drug the massive sword behind him while he lumbered slowly towards you… I shudder at the thought. Silent Hill (most of the time) manages to get everything right, the setting, the creatures, the stories, the endings… Nearly everything is perfect about the Silent Hill series (as far as horror games go, that is). And that is why, the Silent Hill games will always be some of my favorite horror games of all time.

I’ve never really been one to play horror games, but I purchased Dead Space 2 a few days ago. I made an event out of it; I waited till 10 PM, shut off all the lights, closed the blinds, and started it up. Big mistake. Aside from the jump scares (which liberally scared the living hell out of me) I may or may not have yelled something un-publishable when I was cornered, and my only weapon was a pistol with 2 rounds left. Needless to say I think it will sit in my steam library for quite some time. 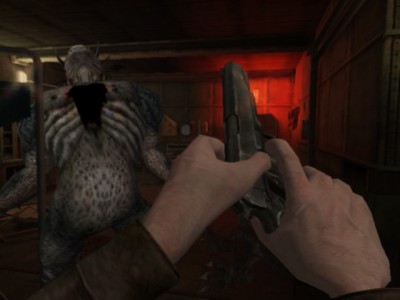 I’ll be honest, I’m not much of a horror fan. Usually horror doesn’t make a whole heck of a lot of sense to me, there are plot holes everywhere, and the general ‘helpless’ feeling that the main characters exude are more often than not a turn-off. There are exceptions to this for me though; games where the story is so well put together or the characters and settings are so cool that I can’t stop playing.

Games on this list for me are the early Resident Evil games (right up to Code Veronica), the original Dead Space, Doom 3, Eternal Darkness, and Call of Cthulhu: Dark Corners of the Earth. I already waxed poetic about Dark Corners of the Earth in last week’s FF, so I won’t go nuts on it again, but this is a classic amongst classic horror games and if you’ve missed this somewhat hidden gem of the genre, you need to go find a copy.

Basically, you play as a detective investigating some murders, when you’re caught up in an insanity inducing trip through the literary works of H.P. Lovecraft and his otherworldly, ancient, interstellar horrors. It’s scary, at times cringe inducing, full of ‘nope’ moments, and genuinely disturbing… if you can get past the somewhat dated (at this point) graphics. Similar to Eternal Darkness, there’s even a ‘sanity’ mechanic that’ll show the mental ware on the main character as you play. So great.

If you can find a copy on the original Xbox or have a PC and can grab a download off Steam, go for it. Especially if you’re a Cthulhu fan, you don’t want to miss this one.

And with that, BG’s Horror Month comes to a close.

It’s been a fun run through the annals of horror game history and presenting the up and coming games that’ll have you spooked here in 2014 and beyond, but like all good things, this month too must come to an end. With last week’s Feature showing off some of the best that the genre has to offer, and this week’s talking up games like Silent Hill 2, Eternal Darkness, Half-Life, Doom, Dead Space, Call of Cthulhu: Dark Corners of the Earth, and even Zombies Ate my Neighbors, you’ve got plenty to play if you want to take a trip down ‘horror game’ memory lane.

So, happy gaming… and maybe leave and extra light on tonight…

Jason's been knee deep in videogames since he was but a lad. Cutting his teeth on the pixely glory that was the Atari 2600, he's been hack'n'slashing and shoot'em'uping ever since. Mainly an FPS and action guy, Jason enjoys the occasional well crafted title from every genre.
@jason_tas
Previous Discovery releases a pair of new teasers for Russian Yeti
Next Third Call of Duty map pack incoming, will be on Xbox June 3rd